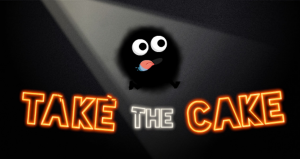 I have to admit, I’m a simple person, I see Cake in a game title and I’m in. so it was hard to resist trying out this new game by Ebenit called Take The Cake. Judging by the title you’d expect a colorful and “tasty” looking game with sweets flying around and yummy items to collect but that’s not exactly the case. Let’s take a look and find out what it is about.

Take The Cake takes in a world where small black furballs live and our protagonist is called frank. Frank is a furball just like the rest (in fact they all look the same) and one day he experiences their favorite cake been taken away by a big robot with no explanation as to why. Shocked as he is he embarks on a dangerous journey to claim it back. Yes, as you can guess it is a rather lighthearted and simple type of game with no deep meanings and the like. 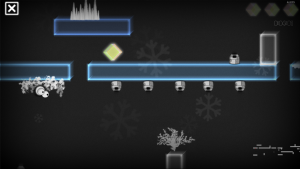 There’s not much you have to or can do in the game and this combined with the luck variety in the stages and actions, makes the game rather monotonous. There are a total of 27 levels in five different environments. You walk and jump on platforms and in order to go to lower or higher places you have to either grow to increase weight or shrink to allow the platform to go up. This is rather intriguing at first but could get tiring after a while because of how often you have to change between these two actions.

The moves are also done in a slow manner. I understand that this was done on purpose and I admit it is lovely to look at but it gets just as stressful as a very fast sequenced game that won’t let you take a breath. It would be better if there was an option to move faster while still keeping the slow default movement for when the player feels it is helpful.

As you progress you will also be able to alter gravity and walk upside down which was really cool and challenging and I enjoyed getting the grasp of. And it was my favorite aspect of the game. The enemies are rare to find and while this could be a good thing, again, there should be a better balance between action and calm moments.

There is also an option to compete with other players in terms of timing which can spice things up. The levels are not vastly different one from the other and the changes are basically the backgrounds and colors. I was hoping for more challenges and traps to feel that I’m actually making progress but unfortunately it felt like the same level over and over. 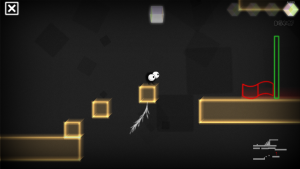 Appearance-wise the game looks atmospheric thanks to the moody colors that and are in contrast to the cake itself which is colorful and vibrant and the cute design of Frank. It’s a lovely game to look at, though nothing exceptional. In terms of soundtrack it has some nice vibes and I enjoyed it, but most of all I loved the screaming voices of the furballs that are adorable and funny at the same time.

Take The Cake is not very exciting but it is not a bad game either. Its price is a little too much though for a game that doesn’t take more than two hours to finish. The anti-gravity mechanism is very fun and despite the game’s overall shortcomings, it is not a game that I regretted playing. Let us know your thoughts and impressions in the comments below.

Download Take The Cake on Steam and Itch.io here.

Take The Cake screenshots (above) and trailer (below)