Text adventures are one of the first games to appear on PC around the late 1970s and early 1980s. Also known as interactive fiction, all of them are played exclusively through instructions that the player types on the screen. With text adventure games now scarce in modern times, No Code brings us the Stories Untold, an experimental title that blends the past with the present.

Stories Untold is a collection of four thriller stories, seemingly not related to a common theme. In the beginning, only the first story is available, with the rest being unlocked one by one, in an episodic manner. The less you know about the case, the better, as each one lasts for only about 30 minutes, but what you need to know is how it manages to mix the reality we live with the reality of the game in a quite smart and unexpected way. The finale hides surprises that you probably do not expect, although the expert players may figure a few things out by half of the second story. 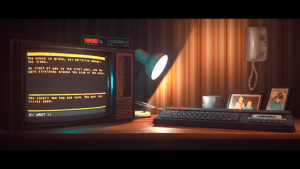 Most of the game takes place on a screen where you type instructions directed at the protagonist, such as "open door", "look around" and others. The first story is the one that looks more like traditional text adventure, with a CRT TV flickering in a low-light room around the '80s. In the second story, you are transported to a dark laboratory where you are asked to perform experiments in a certain order, while in the third story you take over the broadcasting of messages by radio. In these two stories, it doesn’t have much to do with typing instructions, as with clicking on the appropriate instruments and setting up the equipment as some form of puzzle. The fourth and last story is also the most interesting, combining many of the above-mentioned elements through a thriller and mysterious atmosphere.

Unlike ordinary adventure text, not all common commands are recognized, but only the most necessary. For example, the "use" or "go north" commands are not recognized by the system, just like the classic "help" command, which should list all available commands. However, simple and basic commands such as "open X", "go to Y" and "read Z" are enough, especially in the first story that almost exclusively progresses through commands. Right click to zoom in to see closer to the screen where you type, which is almost necessary when 0 looks like 8 or when the screen flickers and you can’t read the text clearly. However, these "problems" seem to be intentional tricks that add to the retro atmosphere that the game wants to create. 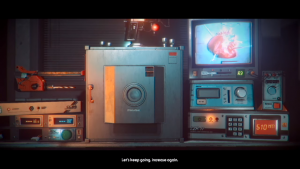 A negative element of the manipulation is that the text does not appear on the screen, but you have to wait for it to load so you can type a command. So, if you type something wrong or look twice in one direction, then you have to wait for an entire paragraph, word-for-word, before you try again. Not only does this delay you more than it should, but it sometimes leads to unnecessary duplications. Another thing that will most likely confuse new players is the absence of a tutorial. Also, the introductory video in the three of the four stories is exactly the same, without giving you the chance to skip it.

Stories Untold is available on PC for $10 and it includes all four stories. 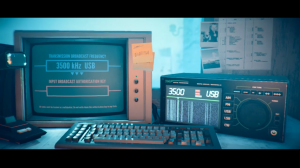 Visually the game looks good and considering there are limited things to see, here’s not much to be said about it. The sound sector is one of the most atmospheric elements of the game, scaring you with sound effects when necessary, such as old keyboard sounds, burning lamp, TV buzz, etc. The absence of background music aims to emphasize pseudo-realism, putting you in the lead, as much as possible, with several surprising elements.

Stories Untold lasts about three hours, depending on how quickly you enter the right commands in each separate story and how many different commands you test, with each story having a much longer duration. It's not a common text adventure, but a psychological thriller with twists, while the finale binds nicely everything that's been before, even what they did not seem to make sense to. It's an interesting experiential experience with a good dose of '80s. Let us know your thoughts and impressions in the comments below.

Stories Untold screenshots (above) and trailer (below)