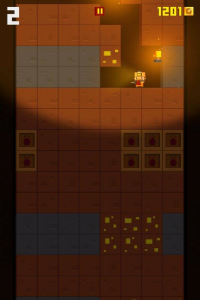 Why are mining games such an addiction? Is it the hidden treasures factor? Is it the digging that creates a nice feeling by smashing blocks? Or is it the excitement caused by our desire to find out what awaits us the more we dig? Perhaps it’s all these reasons together but whatever the case, one thing is for certain; Mining games are hard to say no to and give the player a satisfaction that is hard to find in other types of games. Last time we reviewed Tiny Miners (you can read the review here), and this time we’re back with Mine Blitz by Pine Entertainment. Let’s see what it has to offer.

In Mine Blitz you control a miner that needs to dig his way out by smashing blocks until you reach the bottom and the end of the level. Unlike other similar games, you can’t control where the miner goes (left or right) as he moves automatically starting from left to right and back. Your only available action is tapping to dig on the spot he is at. To be honest, this annoyed me at first as I found it really weird and unfair but as I played more and gotten used to it, I started looking at it as something challenging and unconventional. Most blocks are mare dirt, but gold and treasures are also among them and are easily distinguished so planning ahead your movements is possible and necessary. Obstacles are of course also an integrated part, with bombs, pikes, creatures and other traps waiting for one wrong move. You need to act quickly to avoid these unwelcome encounters because the miner moves rather fast and sometimes you’ll have to sacrifice precious treasures to save his life.

After you complete a level you can activate a checkpoint which allows you to move on immediately to the next level without worrying of starting over in case of a game over. The checkpoint can be activated by watching a game ad or by paying in gold, which is the game’s currency. Of course, watching an ad is the obvious choice because I don’t see anyone wanting to give away the hard earned gold for that when they can use it for more fun things, mainly the power-ups such as the magnet that attracts all coins to you, or the coin doubler and the invisible cloak that keeps you safe from monsters. 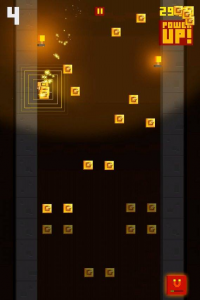 These are the game’s main features as it is fairly simple yet challenging and you’ll get the grip of it rather fast. You can enjoy it for a few minutes but it is not a game you can play for hours. Its fun lies in spending a little time on it each day.

In Mine Blitz you can purchase an ad remover plus an all checkpoints unlock for $ 4.99, and you can also purchase gold bundles in various prices. Both of these are optional and although collecting gold is not an easy task, the game is rather fair and doesn’t force you into buying anything.

Mine Blitz uses voxel graphics and crystal-clear colors. Everything looks smooth and professional. Smashing blocks is also very satisfying due to the sound effects and I believe you’ll all agree on that.

All in all, Mine Blitz is a game perfect to kill some time with, with simple gameplay but enough content to keep you interested and returning for more. It would be a lot better if collecting gold was a bit easier or there were more around, but other than that it is fair and fun. Let us know your thoughts and impressions in the comments below.

Mine Blitz screenshots (above) and trailer (below)