Game Review: Odd Bot Out for iOS and Android

Odd Bot Out launched in early February and without a doubt, it is a must-have mobile game this season and a sure entry in top 20 games of this year. Set in a sterile sci-fi setting, it takes you on a journey of an unlikely hero, a flawed robot thrown to trash. Instantly addicting, charming and cute, Odd Bot Out is a moderately hard puzzler, perfect for grown-ups and kids alike. Players can enjoy it offline, on the go, or better yet, immerse in a few hours of continuous gameplay session. Read our review for more details! 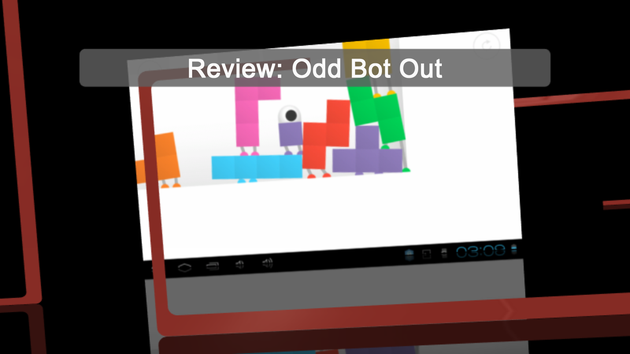 Odd is one of the many robots on a smart robot factory. Unlike his fellow robots, it fails to pass a height test and gets thrown to trash mercilessly. Unlike the many other robots dwelling in the trash, Odd is determined to find its way out, and so begins its journey of mind-bending puzzles.

Odd travels from one room to another of something that appears like an underground part of the factory where spare and broken parts lay silent, but “alive.”

When Odd Bot appears, it starts interacting with them, building up structures that serve it as bridges, swings, dogs, birds, rockets and horses and help Odd get from the entrance to the exit to the next level.

Odd does not have arms and hands, but a pair of tiny, somewhat uncertain legs and one big, but very expressive eye. You will laugh and giggle as Odd will give you surprised and wondering looks with that one eye, when you try to build things around it.

Both sides of Odd are like magnets, and you can build your structures around it. On other occasions, you will just drag and drop items, trying to rearrange them into something that makes sense. On more than one occasion, you will have a good giggle at the stupid things you build, but sometimes they, too, might work. Odd Bot Out is wonderfully non-punishing and lets players get creative.

There are no time limits on the levels. Nor are there any life or energy meters – players can have as many retries as they please to pass a level.

Some of the pieces will be like Odd, with eyes, or legs, and when they are many, they surely make a colorful, jolly crowd. 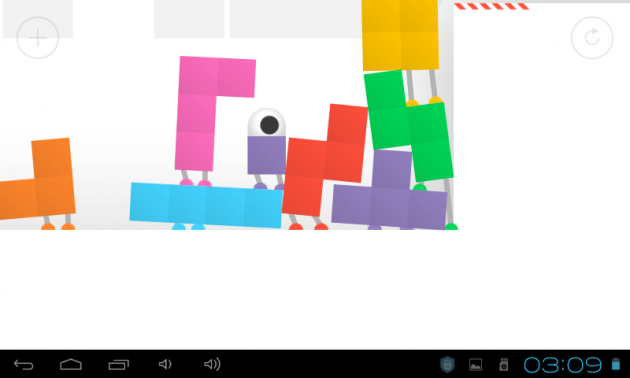 The developer did something incredibly ingenious with a white background and a bunch of colorful 3D squares and rectangles. The game is beautiful in its pure minimalism, and yet, the design manages to convey little shades of emotions, which at some point, get players to empathize with the funny and cute robot that might as well be a trash can.

The little uncertain footsteps as it tries the shaky structures; the perplexed look in that one eye as you land a dumb structure upon its head; the wiggles and kicks, and pushes of the colorful blocks with tiny legs – the puzzles do blend into an engrossing adventure you will want to follow to the end. And, spoiler alert, there is a way out of that factory, so keep trying! Odd will be free.

The soundtrack and the accompanying sound score are amazing. The sounds of clamping footsteps, the tossing and turning, the ambient music and sounds create a relaxed, laid-back atmosphere perfect for concentrating on the task at hand. However, a fully-fledged soundtrack would be a welcome addition. 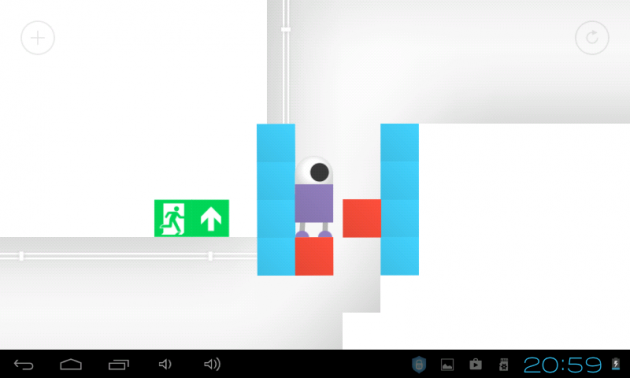 As I said, most of the time you will be drag-and-dropping items that can be rearranged in many ways. Some or all of their sides are magnetic and can stick to the robot itself, the walls, or one another.

Sometimes, the puzzles would require precision in placing them so that they don't crumble while Odd walks on them. Sometimes, you would need to build a walking, flying, driving or a live ladder structure. That is when you will need to activate different switches and re-connect wires on the structures. Not only those levels require precision in space, but also a perfect timing. For example, A swing structure in some of the 80s levels requires you swing a pretty heavy thing back and forth to let Odd jump on and off it, and it can get aggravatingly difficult. So, sometimes, the game is also a reflex-based twitch game, not just a puzzler. 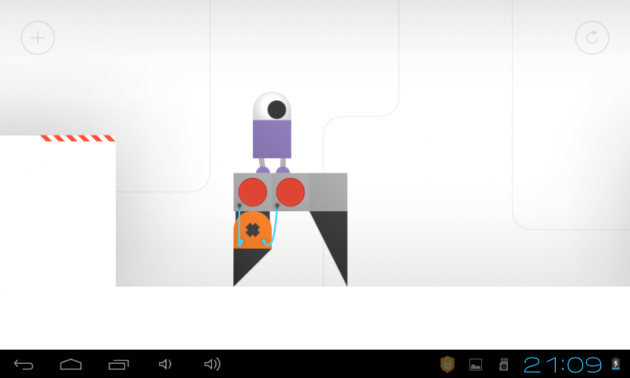 Odd Bot Out features 100 levels of varying difficulty. The initial levels are naturally the easiest, but never does a level feel like impossible, so the young players will enjoy the challenge as much as the adult ones.

That said, I did indulge in an occasional sneak peek into YouTube for a walkthrough. Sometimes, when you look at the picture for too long, you stop seeing the perspective, you know. 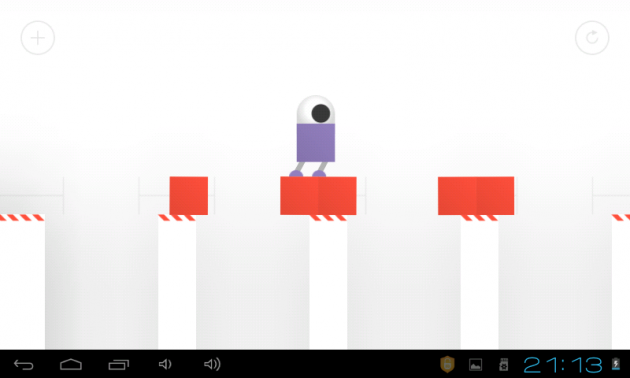 The Android game has two versions – a free demo with 10 levels, and a full paid version worth $1.99, ad-free, IAP-free. The iOS game is premium-only.

It is a delight how you can not buy your way through the game. No power-ups, no boosts, no cheats, no walk-arounds. Just your spatial skills, creativity and the challenge.

Also, the game does not need a connection to run, so it is perfect for the commuters. 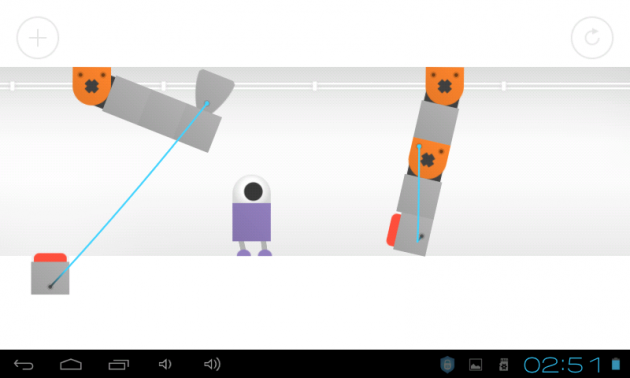 The game offers 100 levels, and depending on how much free time you have on your hands, you may be looking at a few days to a few weeks of gameplay. The game is fun enough to keep it once you beat all the levels and wait for an update with an extension, and the developer suggested there would be extensions. Until then, Odd Bot Out provides for a great getaway every now and then as you re-visit the trickiest levels, finding new ways of making it through the environments.

Another factor in the game's accessibility is the UI. Basically, there is just the main menu with the levels, and that is it – no options, no menus. A button to restart a level, or exit it. The progress gets saved automatically. 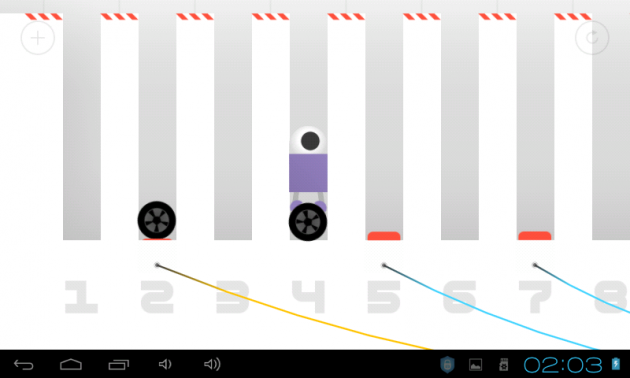 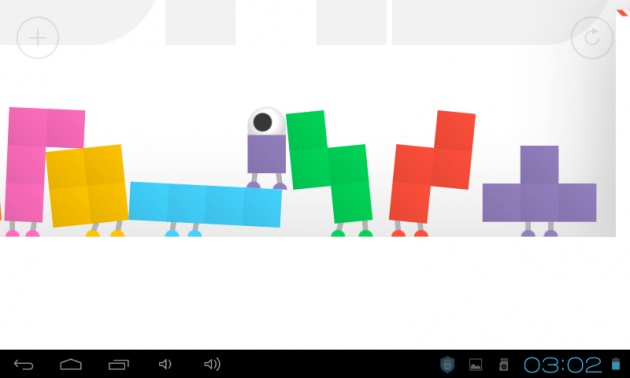 Odd Bot Out is a beautiful challenge to puzzle fans and an engrossing adventure for the curious minds. Narrating a story of a robot without saying a word, the game shows a self-aware AI with a very human quality – it falls and fails, but it does not give up and tries again. We suggest you join its adventure because it is ultimately a very fun and interesting puzzle-based story worth every cent.

#android #ios #review #games
Comments (0)
< PREVIOUS ARTICLE
How to change a network's name in Windows 8 or 10
NEXT ARTICLE >
Game Review: Stories of Bethem for Android and Windows