I am sure that all of us at some point have been thinking about the turn that our life could have taken if we had chosen a different subject of study or work. Often a decision of the moment is enough to determine our future. You see time, the fourth dimension, goes only forward. What would happen though, if eventually mankind invented a way to reverse its direction? If we were able to intervene in the events of the past?

In The Sexy Brutale you take on the role of Lafcadio Boone, a middle-aged man, who wakes up from the voice of a mysterious female entity in the mansion of the millionaire Marquis. The enigmatic owner of the manor house, which acts as a casino, performs a costly masked ball every year for the sake of a select number of guests. This year, however, something went very wrong. The time is 12 pm. You witness an eccentric guest, searching for something in the window of an old, scraped-up furniture. You follow him to see him enter a place that resembles a sanctuary and talk to a member of the staff of the mansion. For unknown reason, the staff member does not hesitate to shoot him in the chest. And then…time is turning back. 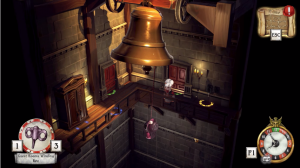 You wake up again in a different room of the mansion this time. Next to you, you see the shotgun, with which the guest was shoot, and a wardrobe in which you are hiding without a second thought, terrified. When the killer enters your room, panic takes over and you run from one room to another to save your life until you meet the familiar, warm female figure that woke you up. It urges you to calm down by informing you that the killer does not chase you, as your mask makes you invisible to the eyes of the others in the mansion. The staff are the killers and the guests are the victims, but all of them are controlled by the masks they are wearing. She then gives you the pocket watch she collected from the victim's body. If you can get back to him, he can activate his full potential, but to do this you must first save his life.

Your purpose in The Sexy Brutale is to prevent 10 horror murders. Each of these 10 missions at a glance seems to be self-contained. However, in the final part of the game, the distinct stories that take place, are connected as you can now perceive the origin of the time control capability, the real symbolism of creepy masks and motives, as well as the true character identity of everyone, including your own. In The Sexy Brutale nothing is as it seems, as the finale comes to show that often the human mind, in its attempt to reconcile the past with the present, may play strange tricks. The game has two alternative endings, each of which throws plenty of light on the questions that arise, with twists you are hardly going to predict, even if you are quite observant. 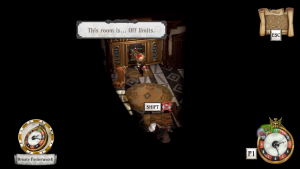 With regard to gameplay, The Sexy Brute is a peculiar adventure, in which you are invited to complete your goal of moving around silently, manipulating the time for your benefit and taking advantage of the amazing abilities that you gain gradually as you progress. Your purpose is to watch, understand and memorize the order of acts of each character and turn back time to break the chain of events leading to the murder of the individual victim. Your character creates a pulsating wave that detects suspicious movements in space, and can also see from a keyhole a limited part of the room you are spying on. If you find yourself in the same room as someone else, his mask is removed from his face and moves towards you, lowering your health points. At the same time, time freezes and you can’t interact with the objects around you. To save yourself you have to either hide inside furniture such as a wardrobe before he enters or leave quickly.

In the villa you will find scattered various mechanical watches that interact with your pocket watch, acting as starting points of the day in which you save your progress, provided you have discovered, by exploring the place, the appropriate mechanism for each one of them. In addition, the pocket watch allows you to start manually at any time of the day from scratch. If the day is over without you being able to complete your mission, the clock indicators turn back and you lose all of the key items you have acquired. So the time factor increases the intensity during data collection as it forces you to make quick decisions, but it often leads you to trial and error situations forcing you to perform the same sequences of acts and to see the same scenes again and again, a situation that gets worse when missions take place in larger parts of the mansion. 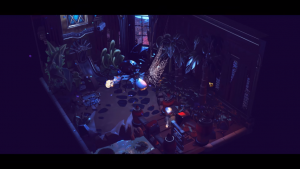 When you save the life of a guest, he gives you his mask, which also provides you with a new ability to modify the rules of the game. For example, the Trinity mask increases the sense of hearing and vision and thus enables you to eject the code of a locked security door by monitoring the hand movements of a staff member during typing. Thanks to Willow's mask, you perform occult rituals to make visible the villagers' ghosts, which often give you advice and new details on how to complete each mission. Other masks allow you to tamper with locks or make you aware of the memories of a character who knows hidden secrets of the villa.

The Sexy Brutale is available for PS4, Xbox one and PC for $20. 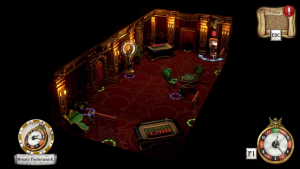 The cartoon aesthetic of The Sexy Brutale creates an interesting contrast to the scary crimes taking place within the mansion. Low lighting creates an overwhelming atmosphere in the surroundings. During the tour of the villa, you find an infamous bar, an atelier full of strange artwork depicting creepy heads or even a well-tended garden with flowers and trees painted in red and fountains sparkling gurgling water. An area where The Sexy Brutale undoubtedly excels is music. It mixes in a peculiar way classic swing and dance rhythms, making it engraved in your mind for days.

The Sexy Brutale is another success story for the Tequila Works, as well as the co-creator Cavalier Game Studios. The Sexy Brutale is a creation with unique visual, imaginative mechanisms and history that leaves material for thought, which undoubtedly deserves the attention of those of you looking for an adventure puzzle different from the usual. Let us know your thoughts and impressions in the comments below.

Download The Sexy Brutale for PC on Steam here.

The Sexy Brutale screenshots (above) and trailer (below)

#game #review #the sexy brutale #ps4 #xbox #pc
Comments (0)
< PREVIOUS ARTICLE
The Top 6 Keyboard Apps For Android
NEXT ARTICLE >
How To Send A Fax For Free, Online From Your Computer