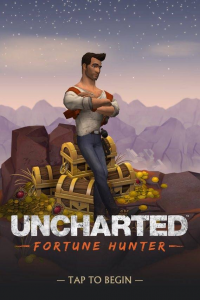 I’m sure many of you are fans of the Uncharted games and follow the adventures of the male Lara Croft, Nathan Drake on his quests in various locations to find ancient (or not) treasures and deal with notorious enemies and dangerous traps. It is undeniably one of the most famous franchises and every new announcement regarding a future release is greeted with plenty of excitement by its fans. It was thus a very pleasant surprise to see Uncharted hitting mobiles similarly to Tomb Raider and offer players something less stressful than the actual games but challenging nonetheless.

Fortune Hunter follows the adventures of the famous duo Drake and Sully as they explore ancient ruins in order to do what they do best; uncover lost treasures and relics amidst dangerous places full of traps. Can you solve all the puzzles and reach the treasures without falling victim of sneaky traps and move on to the next challenge?

The game is basically a puzzler about collecting loot. That’s your main objective and there are no twists or depth in the story like it happens in the PS games. Our mc, Drake finds himself on top of a fragile ancient ruin and Sully is simply helping with secondary issues such as the loot, rewards and at first he is explaining the rules of the game. There are also dialogues between them at the beginning of a new level and in many cases they are quite funny but can get tiresome after a while.

Your goal is to move from point A (which is your starting point) to point B (which is the block that the treasure is kept at), by sliding your finger on each block that Drake needs to walk on to reach the gold. At first it is fairly simple with hardly any dangers or difficult puzzles around you but things become trickier as you advance. You will come across a variety of mechanism that you’ll need to make use of to open the right paths towards the exit, and at the same time avoid the traps such as, blocks that shoot darts, or blocks that are too fragile and will collapse if you step twice on them, or ones that if you stand on them when they elevate they will reveal a rather large spike that will impale you (I wouldn’t recommend it actually). 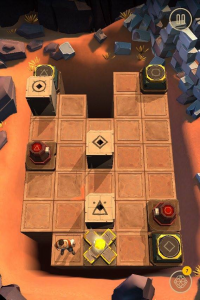 To open the treasure that is protected inside a box, you’ll have to first reach the switch mechanism that will open it by tapping on it and then follow another route to collect it. You will have to tap on other mechanisms that can elevate blocks and block your way, push and carry other blocks, shoot against switches that are far from you (you can only do this when there is nothing in between you and the switch, placing and shooting explosives, and most importantly do everything in the right order to be able to proceed.

Fortune Hunter is not so much about timing as it is about planning your actions beforehand. The traps are not activated unless you start moving so this gives you the advantage to double check your options and test your strategy step by step. While you can perform as many moves as you need to, there is a counter at the top left that shows how many moves you have left before you lose the chance to be rewarded a key. Every level has this goal and if you reach the treasure without exceeding the moves limit set each time, you get a key which unlocks loot chests provided by Sully and reveal items that are very useful to you e.g. gold coins, premium currency (Mystical Orbs), or even unlocks for PS game Uncharted 4. As you can see, these keys are not just there to offer some unnecessary rewards but are actually quite significant.

These Orbs we mentioned above are not fancy treasures but in reality serve to help you escape a level you find it hard to clear, and also help to get the key and all loots present on the level. Speaking of which, there are orbs and gold scattered in some levels and you should do your best to grab them even if it costs you a key. After all, you can always replay the level and try over as there is no life limit and you can play as much as you desire. Each map lists the levels available and to go to the next map you’ll first have to find the missing pieces of it. By the time it is completed, you can start a new adventure.  Some levels will not be as interesting or clever as others but that’s to be expected considering there are over 200 levels available.

If you have the Uncharted 4 game, you can sign with your account and grab outfits, weapon skins and also relics and boosters for Uncharted 4’s multiplayer. However, you must first meet the requirements for each one e.g. to collect x number of treasures. 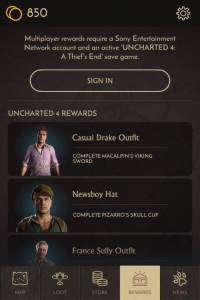 The only IAP available in the game is the Orbs bundles with prices ranging from $ 1.99 for 20 orbs and going up to $ 9.99 for 150 orbs. There is also a treasure map that reveals the location of all treasures on all maps and can be purchased for $ 0.99. You also have the option to spend 10 orbs to get 5000 coins. Everything else is purchasable with coins and by that I mean various costumes, some cool ones and some funny ones (the mime is my absolute favorite).

Visually Fortune Hunter looks very nice and the 3D graphics are as detailed as possible for this type of game. The colors are vibrant and I especially love the design and color of the orbs. As for the sound effects, those of you familiar with the PS games you notice that they are also used here but of course optimized for a mobile version.

Fortune Hunter is a game that all Uncharted fans should have and it is also very enjoyable for players who enjoy puzzlers and challenging games. As we mentioned earlier, not all levels are perfect but the game does a really good job at keeping you interested and it is also fair in terms of difficulty. The controls are also intuitive and the overall look very pleasant to the eye. Let us know your thoughts and impressions in the comments below.

Uncharted: FH screenshots (above) and trailer (below)