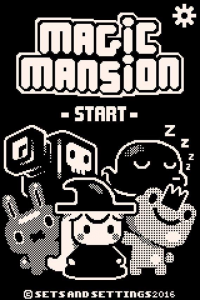 Who doesn’t like a good magical story with many witches, good or bad, and haunted castles? I, for one, can’t contain myself when I come across a movie or game of this type and as a result there’s no way I could ignore Nitrome’s and Sets and Settings' new game Magic Mansion. Nitrome is known for creating amazing retro titles with simple gameplay. Magic Mansion wouldn’t be an exception to this and those of you familiar with the old Game Boy black & white titles you’ll notice how similar it is to them. This nostalgic feeling that it creates will certainly leave no retro game lover uninterested.

In Magic Mansion you control a cute blonde witch that wants to reach the top of a never ending castle. The only action you can perform is to tap to make her jump to avoid traps or enemies and climb stairs. Similarly to most Nitrome games, Magic Mansion too is an endless platformer with your goal being to survive as much as you can and get the highest score possible.

There is a variety of obstacle and traps for you to overcome but although it has a very simple gameplay don’t be quick to judge it as too easy because the difficulty level will prove you wrong. Along the way you will come across spikes, moving lava (or I think that what it is, could be chainsaws), canons that fire at you, weird looking creatures and more. You can’t fight any of these so don’t try to jump on them in an attempt to defeat them because it will backfire. Your only concern is to jump over and collect coins along the way. Basically timing your jumps is the only way to advance. Since your character moves automatically, you need to make decisions fast as well. Often you will come across blocks and while the obvious action is to jump over them, you can also collide with them because this will make them collapse and reveal either coins or spikes. It is a risk worth taking because you have enough time to avoid the spikes and coins are always welcome. 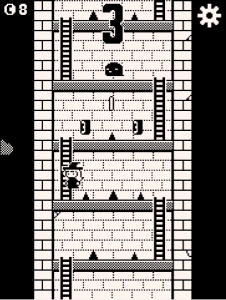 When you lose you are given the option to continue where you left off by spending coins or watching an ad. If you reached far then I suggest you watch an ad instead of starting over. Getting a high score may not give the player something they can use but it is a nice feeling nonetheless and it’s never futile to try our limits. Coins can also be used to unlock other cute characters like a kitty or a rabbit,all worth different amounts of coins.

That’s basically all there is to now about Magic Mansion. All it takes is timing and practice to become one of the best players, but even for those who simply want to spent their free time with something cute and fun, it will be an enjoyable experience.

Magic Mansion doesn’t include any IAPS except an ad removal. The ads could get a bit annoying at times but they’re not as forceful as it happens in other games and I wasn’t bothered by them for the most part.

As mentioned earlier, Magic Mansion is an 1-bit retro game in black and white and visually you will feel you’re playing on the very first Game Boy. I love the way everything is designed be it the castle itself or the enemies and of course the characters are adorable and hard to decide which to one to plays as next. The BG music and sound effects are also vintage and very nostalgic and uplifting.

Overall, Magic Mansion is a very enjoyable game, with a nice setting and characters and certainly one more game that Nitrome can take pride on. It is suitable for all types of players and even more so for those hit by nostalgia like myself. Give it a try and you won't regret it. Let us know your thoughts and impressions in the comments below.

Magic Mansion screenshots (above) and trailer (below)