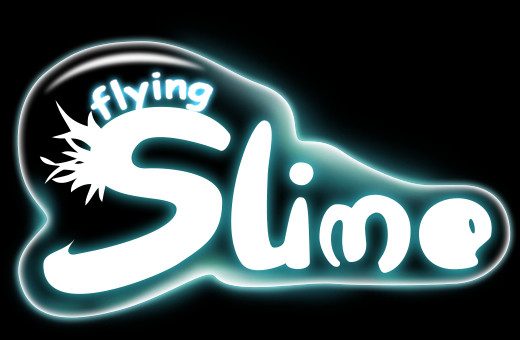 Games are fun when they have a good story and gameplay, but they are even more valuable when they are trying to convey a message through their story. Such is the case with Flying Slime that is developed by Firefish Interactive Technology. Behind its unique story and lovable characters lies a message that reflects the fear of not only the developers but most of us as well, the fear about what is going to happen to our home planet after all the destruction that human arrogance has caused to the environment and more specifically the deforestation that keeps happening with no signs of it stopping any time soon. With this in mind, the people behind Flying slime bring us a game full of courage, magic and cuteness to urge us to think more about this important issue. 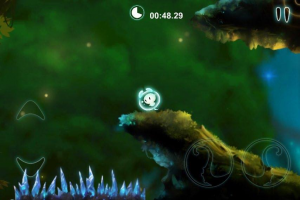 The game takes us in a world where creatures called Slime live. The Slime lived happily in their forest until one day, humans decided to break the peace by deploying the feared Harvester machine that was equipped with rotating blades capable of destroying anything in its path. The adorable creatures, having no other alternative were forced to flee their homes to survive. All but one brave little one named “Slimie” who refused to leave and decided to go on a quest to save their precious home.

Flying Slime is a 2D swinging platformer in which you control the vines that Slimie has and move him left and right (you do this with the vines’ buttons at the bottom right of your screen) and up and down to increase or reduce the leength of the vine(the buttons are on the bottom left of your screen). This is not an easy task as it takes time to learn how to perform so many actions at the same time and although it gets easier after some practice, it is a tricky control system. Especially after progressing a lot and reaching levels that are harder and with more obstacles, it becomes apparent that the controls should be more user-friendly. 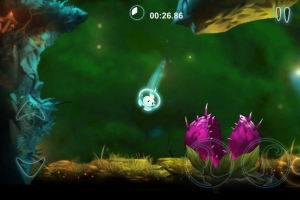 Despite this issue though, the game is very enjoyable and challenging. Your main objective is to find the spirit hearts that wait at the end of each level. If you reach the end during the designated time then you can unlock more levels (over 60 in total) and get rewards. A perfect score rewards you with 3 leaves. The game also has Spirit Stones  and when you have plenty of them, you can unlock more characters and continue the game with another one to avoid monotony.

Each level takes place in a different part of the forest, with many blocked paths, tree roots and floating rocks. You need to find your way through them and discover the right path that leads to the stone heart with as little collisions as possible, avoid being eaten by carnivorous plants and of course before the time runs out. While the levels are not long, they are made in a way that you can’t find easily the way out and at many instances you’ll have to go back and seek another path because of dead-ends. these type of challenges are very intriguing and enjoyable.

There are many game modes to choose from, namely:  The Survival mode in which you use special skills to elude the evil harvester machine and collect Spirit Stones to unlock Slimie’s friend, the Story mode where you need to find the Spirit Heart to rebuild the Slime homeland, and the Multiplayer mode where you can play against your friends and find out who can go further in Survival mode. According to the developers there will be another mode coming out called Challenge. Before starting a level you can watch videos from other players that cleared that level and get an idea of what to expect and use it for organizing your moves. It is a very clever addition and I was pleasantly surprised when I discovered it. 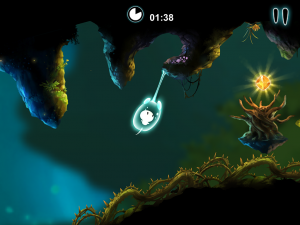 Flying Slime is available for iOS devices for $2.99 and there are no in-app purchases present in the game.

Flying Slime is now free to play on iOS.

Visually the game is simply stunning and impressive. Everything looks smooth, the environments atmospheric and everything looks like it is taken out of a fairy tale. The way Slimie and the spirits shine and glitter is also beautiful and the whole setting reminded me of a very loved PC game called “Ori and the Blind Forest”. Those of you who have played it you will see the resemblances right from the start. Flying Slime excels in the graphics department and the BG music is also calm and sweet. At times you will also here Slimie’s voice and, yes, it is adorable.

All in all, Flying Slime is a game designed for players that enjoy difficulty and like to push their limits. It gets frustrating at times when Slimie collides with obstacles often and you need to master the controls to be able to get a perfect score, but it is also challenging, intriguing, it has many surprises and it is gorgeous in terms of graphics. Let us know your thoughts and impressions in the comments below.

Flying Slime screenshots (above) and trailer (below)