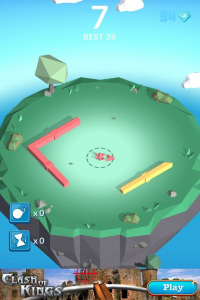 Artik Games are back with a new game called Crystal Rush that will push your reflexes to their limits and for good reason. Let’s take a look at what it has to offer.

In Crystal Rush you must watch your moving arrowhead color and tap to shoot when the arrow points at the same colored geometrical figure. Easy at first but harder the more you progress as more colors appear and a wrong hit means game over. Spending too much time to tap is also not encouraged because the tiles will start moving closer to you if you take too long to act and as a result you’ll lose again. If your hit misses and goes between two tiles the arrows color will still change so be careful not to try and hit the tile with the previous color. I made that mistake quite a few times already and it annoyed me more than any other game over.

There are unlockable stages available as well and some of them can be unlocked by following the game’s social media. For the rest you spent gems that you are rewarded with each successful hit.

There are plenty of IAPs for removing ads, for purchasing gem packs and more. Everything is optional though, and not really necessary for enjoying the game as it is in its freemium form.

Crystal Rush is all about quick reflexes and a keen eye. For a game that its main objective is to get a higher score each time you play, it is sure to keep you interested with its challenging and addicting gameplay. Have you played it? Let us know your thoughts and impressions in the comments below.

#android #ios #games #review #free #crystal rush
Comments (0)
< PREVIOUS ARTICLE
Game Review: Help the black cat reunite with his lover in Mr. Catt
NEXT ARTICLE >
What To Do To Save Your Wet Mobile Device