Home
Articles
Game Review: Callyâ€™s Caves 3 is One of the Greatest Action Platformers

Game Review: Callyâ€™s Caves 3 is One of the Greatest Action Platformers 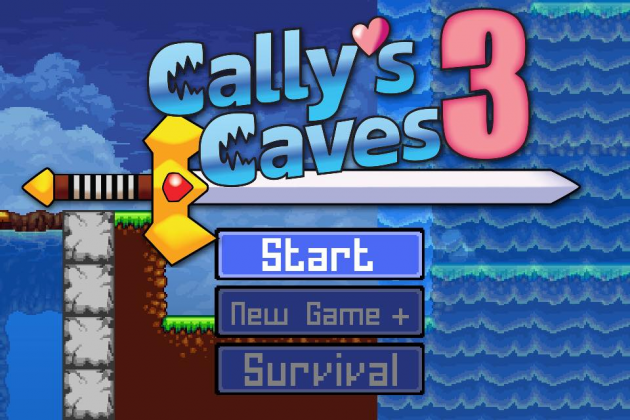 Indie games have proved in many cases to be capable of great things and show the world that what it takes to create a good game is imagination, dedication and love for what you do. This review will is about a great example of an indie game done right which puts to shame many “big name” game apps out there. Cally’s Cave has been improving with every new installment and went from being a good game with lovely plot and gameplay in the first installment, to a more challenging and upgraded version in the second, and now it is back with a release that stays faithful to the previous but is a huge step up in every possible aspect. I honestly can’t get my hands off it and I really want to share with you my thoughts about it, then you can decide for yourselves if it piqued your interest. So, let’s take a look, shall we? 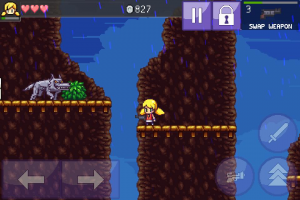 The plot is the same as in the previous games: Cally's parents have been kidnapped again (for the 3rd time in a row) by the evil Dr. Herbert, as he tries to take control of the Caves to perform his evil experiments. Now, it’s up to cute Cally to go and rescue them (again) with the help of her weapons. Join her in one more adventure against strong bosses and uncover secrets in various worlds (and of course caves)!

The game begins in the familiar backyard of Cally’s home where you will meet yet again the friendly figure of the musician Lloyd, who will guide you in many parts of your adventure and will be giving you important advice throughout it. From your backyard you will enter the cave that will take you to the first level out of the 120 that the game has in total. The levels themselves are also quite lengthy but enjoyable and altogether give a fulfilling experience.

The game is separated in 8 zones, and each comes with various levels and a boss at the final stage. The checkpoints are scattered somewhere in the zones, which is an improvement from the previous games since in the 1st one there were no checkpoints (you’d always return to the 1st level of a world if you lost), and in the 2nd a checkpoint appeared in every level thus making the whole experience lukewarm. I believe that with the way checkpoints are handled this time, it’s the perfect balance between difficulty and enjoyment. 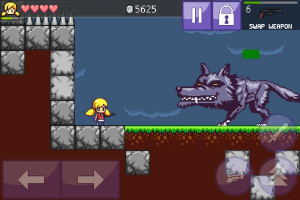 To change between zones and checkpoints you have to open your Map by tapping on the pause button and from there see an Overworld Map of all the zones you’ve unlocked. You can then zoom in on any zone you want by taping on it, and then choose the checkpoint you wish to start from.

Shops to buy items and power-us are also available in each zone, and the seller is Herbert’s son. You are allowed to carry up to 6 power-ups (mainly food and drinks) which is a fair number and enough to cover your needs when you’re in a difficult level. You can also buy hearts (lives) weapons and many more.

The levels come hand in hand with many enemies such as direwolfs, bandits and aggressive bats. To defeat them you can both use your sword or gun(s) and make sure you don’t receive any hits while doing so. The more you use a weapon the easier it levels up and improves in terms of power and damage. Killing one rewards you with golden coins, diamonds, and more.

Apart from enemies, the levels hide many secrets that you need to uncover, although that might be quite hard on your 1st try. Treasure chests are the most notable ones, but there are more apart from them, if you investigate your surroundings carefully. I don’t want to spoil the fun so it is up to you to find the rest. Secret paths and items await for you to discover them. You can always go back to a previous level to find more items or to collect all the silver coins. 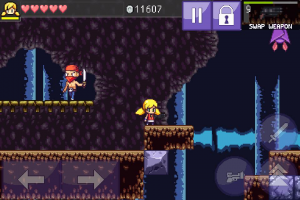 The controls are simple, intuitive and are not lagging no matter how many actions you perform. The right/left buttons are located at the bottom left corner of your screen and the jump button along with the sword and gun buttons are located at the bottom right corner. You can jump higher by double-tapping the jump button. Also, changing between guns is very easy as the gun icon is at the top right corner and all you have to do it tap on it to choose the next weapon in your inventory, or tap and hold to open the weapon screen and choose from there the one you want.

Cally begins with 3 lives and before you level up you won’t be able to make use of more hearts, even though you are collecting them. The more you level up, the more lives you can have.

The bosses are hard but their life bars are not too hard to bring to zero, and the more you get used to their attack patterns the easier it will be to beat them. It’s really helpful that after losing in a boss battle you begin from the boss stage again, no matter how many times it takes. This takes away a lot of pressure and allows you to concentrate on the battle.

The game offers two more game modes for $4.99. The 1st mode, Game+, brings more enemies to the game and allows you to increase the level of your weapons up to 20 instead of 10, which is the roof for weapon levels in the regular game. In the other mode, namely Survival, you have to beat 150 waves of enemies and win an amazing prize if you succeed. It also unlocks the Sniper Rifle weapon which has the ability to auto-target the nearest enemy. Both purchases remove the ads as well. 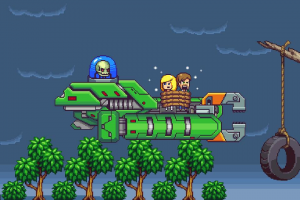 The retro, pixelated designs are looking better than ever and it’s an aspect that has improved vastly from the 2nd game which was released last year. I especially like how vibrant the colors are and the crystal-clear look that the developers adopted for Cally’s Caves 3. The character designs have also distinct differences from previous games, since they now are more detailed and consequently more likable.

The music is also in par with the retro atmosphere and creates a nostalgic ’90s games’ feeling. The tunes are pleasant and the sound effects fitting.

All in all, Cally’s Cave 3 is a step-up to an already great franchise. It is full of action and content and on top of it all it is completely free (the ad bar on top of your screen is barely noticeable and at least in my case it didn’t affect the gameplay at all). It’s a game that leaves everyone satisfied with the fulfilling experience that it generously offers. Its gameplay and graphics are polished and it is apparent that it corrected/improved even the few things that needed fixing from the previous games. This game definitely deserves its high ranking on the app store and all you need to do is download it and then share your thoughts about it with us in the comments below.

#ios #games #best games #free #review #callys caves 3
Comments (0)
< PREVIOUS ARTICLE
What is the Registry and How to Access it with the Windows Registry Editor (regedit.exe)
NEXT ARTICLE >
How to Disable the Windows Update Delivery Optimization (WUDO) Feature in Windows 10