During the 5-hour campaign you are taken on an fictional 2011 where you play the role of a US Marine and a British commander of SAS. The villains of the case are Russian Imran Zakhaev and Saudi Arabian Khaled Al-Asad, who together set up a coup in the Middle East.

Missions take place in various parts of the world, such as the Middle East, Russia and Europe, with action ranging from stealth levels to night vision goggles to stormy battles where you are supposed to wipe out enemy hordes. The slopes are linear, as it is more or less obvious where to go, where to stand safely, where the enemies appear and whether or not to use smoke grenades. However, these slopes offer a great opportunity for an atmospheric taste of war. As for the progress of history and levels, there is no substantial difference between the remaster and the original. If you've finished the story in the original CoD4, then you know what to expect and surely remember levels like All Ghillied Up where you are a sniper and the Mile High Club after the end of the game. 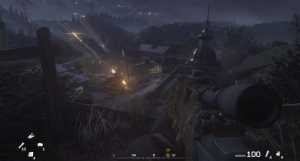 Gameplay offers all the basic sprint, jump, crouch and crawl moves, with the latter being necessary from the level of difficulty veteran and above, where the only way to save yourself from endless fire is to crawl and find shelter carefully behind boxes and ruins. Also, changing the magazine and pulling the fork are done with slow moves, but they bring gameplay closer to realism than to bothering.

A negative aspect of the levels is that sometimes you have to stand at a certain point before you continue, but these occasions are very few. You carry a master gun, a pistol and two kinds of grenades, usually the simple and flash types, but if you wish you can change them with those of the enemies. You will rarely be out of bullets and you can also shoot at enemies through wooden walls and bricks. If you injure someone, then he can continue to shoot you from the ground, so it is good to be sure about your kills. The presence of auto-aim in the campaign makes the game more accessible to most players, without making it "boring" for the more experienced, given the difficulty levels. In multiplayer and console only there is aim assist to cover the lack of precision that only mouse-keyboard handling can offer.

The multiplayer has several modes, the most important addition to the remaster being the kill confirmed, which differs from team deathmatch in that the teams score by collecting dog tags rather than simply killing opponents. Multiplayer offers fast action with many bullets for sharing, but you are more likely to stay alive a bit more than the rest if you play as a sniper hiding on a floor rather than as a "hero" of the first line with assault rifle. As the movement is fast, your performance depends not only on your abilities but also on the luck as to where you will spawn if you have an ally next to you or if the opposing players are waiting to appear. This may not appeal to those who prefer a slower and more strategic multiplayer and those who do not have fun by being killed with a bullet in the back. 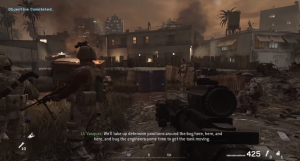 You can slowly improve your multiplayer profile by investing the credits you earn in each battle or directly using real money. In addition to decorative elements such as uniforms and camouflage, you also unlock armor pieces, which when you collect them all you can then make the corresponding weapon. For example, you must earn all six pieces of a weapon before you can make and use it or buy the pieces directly. Purchase credits start from $2 for 200 credits and reach $100 for 13,000 credits. Broadly speaking, microtransactions do not directly affect gameplay, but those who spend money to get what they need are faster than those who choose the traditional method to acquire them with their sweat and tears. Worse, however, is the fact that the Variety map pack is not included in the game but is for sale at a price of $15.

Call of Duty: Modern Warfare Remastered is available for PS4, Xbox One, and PC. You can find the PC version on Steam for $80. 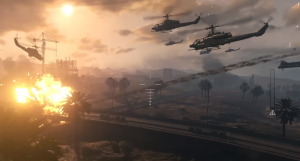 The graphics have improved incredibly, making a big leap from the previous generation to the present and are in no way reminiscent of a game that came out 10 years ago. Improved effects, textures and shadows, both in the environment and in the silhouettes, as well as faces unobtrusive of detail, are approaching today's standards. The damage that the bullets cause to the wood looks clean, and the smoke and the lighting add to the whole atmosphere. Of the few visual aspects of the game is that sometimes the allies fall on you, forcing you to walk around them, which is tiring when it occurs inside rooms and enclosed spaces. The audio has also undergone changes and additions, with the most interesting being the use of the DualShock 4 speaker, from which you hear a lot of the sounds of the weapons, such as filling and arming, giving the impression that you are holding a gun in your hands. The sound effects are closer to the latest CoD than the original CoD4 and are in the expected levels.

With a relatively short campaign and with the majority of players choosing team deathmatch in multiplayer, Call of Duty: Modern Warfare Remastered does not impress as its predecessor years ago, but remains fun in all the right ways. It is a must if you have not yet played CoD4 and want fast FPS multiplayer. Though rather expensive for what it offers, especially for the owners of the original CoD4, as a whole it is an excellent remaster of one of the best FPS of all time.

Call of Duty: Modern Warfare Remastered screenshots (above) and trailer (below)