Find Waldo In His New Free Game For Android And iOS 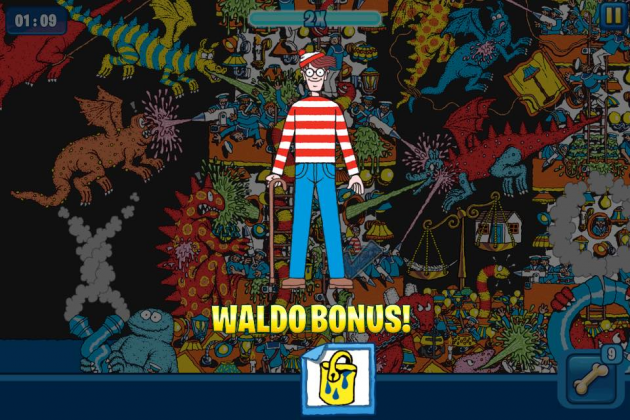 Waldo has been (and in many cases still is) connected to many memories of ours, and even after all these years it is a franchise that knows how to satisfy its fans. Judging from the countless cosplays of Waldo and the number of times he is used in memes on sites like 9gag, it was only a matter of time until a new Waldo game app was released, especially considering that the last one, “Where's Waldo?™ The Fantastic Journey” ($0.99), was released a few years ago. This time the developers at Ludia not only bring us a completely new game, but they also offer it for free.

The plot is quite simple: A terrible twister has swept through the lands and we must find Waldo and all of the hidden objects that are scattered by the twister before they are forever lost at sea! 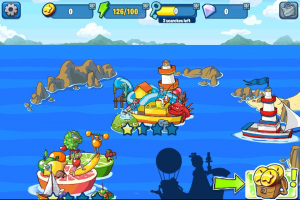 As mentioned in the plot, your objective is to find Waldo and various objects that are hidden among other strange items and creatures. Every land includes a different image that tells a different, usually weird story (like a dragon-inhabited sea village, a cake factory and more, even stranger stuff). Although the premise is simple and the goal very clear, the game includes many various aspects and sub-categories that add more spice and fun to an otherwise usual gameplay.

Firstly, you are given a map that includes all the lands that you’ll have to visit (multiple times) in order to find a specific item and be rewarded coins. Every time you start a challenge there is a countdown (set at 2 minutes) and you must find all items that appear at the bottom of the screen before the time runs out. Waldo doesn’t appear always on the list of items, creatures, and humans you have to find, so don’t try to spot him unless he appears at the bottom of your screen- otherwise you’ll waste valuable time.

Difficulty varies depending on the land and how far you’ve gone. If things look hard and you can’t find an item, plus you're under time pressure, you can make use of Woof’s bone and it will instantly find what you seek. Of course the bones are not unlimited so use it only when it's really necessary. 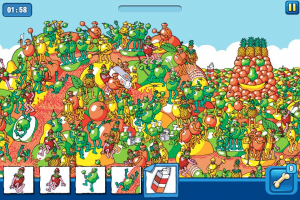 After you’ve successfully completed a hidden objects search, you receive coins that you can use afterwards to unlock a new land. You basically trade items for coins to be able to visit new lands. But lands are not unlocked every time you complete a search task. As I mentioned above, you’ll have to come back to an already unlocked land for a new round, with a different item that needs to be found in order for you to collect more coins. Apart from the coins, after you find the special item, you are asked to play to unlock the next item and continue your adventure.

Other than coins, there are gems, energy and a Key meter. Gems are used to purchase goods from the shop, and you’ll need plenty of them to be able to buy something. Energy refills every hour and you need it to be able to play in lands. As for Key meter, it fills up after every search and once you have two Keys, you can play the treasure chest bonus round and win prices. All of these “currencies” can be purchased in the shop, or through mission rewards.

Speaking of missions, you don’t have them until after you’ve reached a certain point in the game, not very long after you start playing, and to see what missions are available you visit Waldo’s dog Woof and complete them to receive the rewards. Missions include completing searches in many different lands, gaining a specific number of coins by completing Trades, and many more that you’ll discover while playing.

If you connect via FB you can challenge other players in the “Where’s Waldo?” social mobile experience and help your friends by sharing gifts with them. 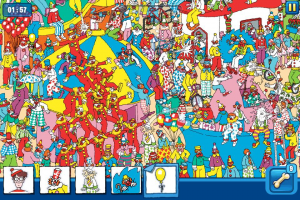 As far as the downsides go, the game has too many ads that pop up after each game and you have to watch them without earning any rewards for that, even though that’s what happens in many other games. Also, everything costs way too much in the shop and I found myself feeling betrayed by the IAP. Furthermore, it is quite annoying that you can only access the game through wifi, otherwise you can’t play.  On top of it all, I noticed that the game fails to load sometimes as if an internet connection doesn't exist, even though there is.

Graphics are vibrant and based on original designs. If you’re a fan of the old Waldo books you’ll feel at home with the designs and you’ll enjoy them immensely. The sound effects are fun and playful and they match the lighthearted atmosphere of the game.

Despite the flaws that were introduced earlier, Waldo & Friends is a very enjoyable game that respects the original work and offers something modern and nostalgic at the same time. It’s not a game that you can play for hours but it is certainly a game that you will find yourself going back to, to relax.