Home
Articles
Dual-Boot Android on Your PC with Console OS

Dual-Boot Android on Your PC with Console OS

Android is the world's most popular mobile OS. Millions of users prefer this operating system to play their favorite games and stay productive. However, the Android OS market od devices makes it a very fragmented product, where every manufacturer takes several months before releasing Google's next OS update, if ever.

Many Android users, not only developers, prefer to use Android emulators on their PCs for a wide scope of reasons. For one, playing your favorite Android games on a larger screen is a delight. For two, staying productive with your favorite apps like WhatsApp using Android on your PC is a lot easier than on a tablet with a USB keyboard.

Last year, we covered Andy Android emulator, a competitor to widely known Bluestacks, but today we want to tell you about something totally new that has a potential to hit the mainstream market – Console OS. 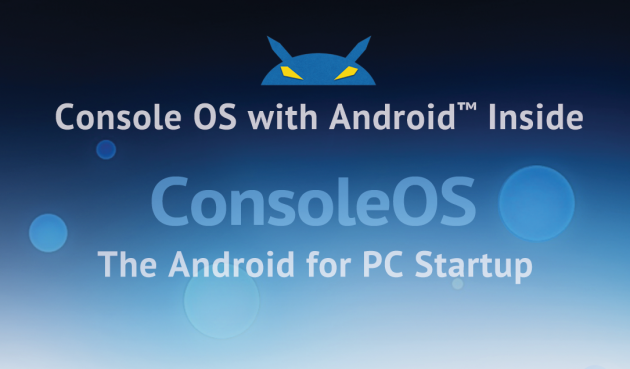 The developers have successfully run a Kickstarter campaign, and are now launching several products, including the fully-functional Android OS for PCs, 2-in-one devices and laptops, as well as an interesting hardware dubbed iConsole Micro, an Android TV stick that lets consumers play on Android TV and PCs that will soon hit the market and be priced at $129.

Console OS Standard is free of charge, and you can download it after registering on the company website. However, it currently requires users possess some technical savvy in order to test and run it.

The currently available release is a free preview aimed at early adopters whose devices run Intel processors, with the main focus on mainstream devices and Ultrabook 2-in-1 convertible devices, as well as a few traditional laptops and desktops.

While it is available for many devices, the website features a list of devices tested for compatibility that are rated according to Green, Yellow and Red functionality. Acer Aspire S7 and ES1, Asus Transformer Book T300, Dell XPS 11, 12 and 13, Lenovo Thinkpad X1 Carbon and Yoga 2 13 and 2 Pro, Sony Vaio Pro 11 and 13, Toshiba Protege, Satellite and Tecra, as well as a number of Intel NUC and Gigabyte BRIX devices have been widely tested and reported as Green, i.e. mostly supported. You can check out the supported and partially supported devices here.

Some supported devices may need a few tweaks, like updating BIOS, or upgrading a Wi-Fi card with an Intel 3160 or 7260 mini-PCIe card.

You will have to install Console OS on your hard drive, or an external USB 3.0 hard drive. Currently, you can't run Console OS from a USB dongle, but this feature is in the works.

The installation process includes a few no-nonsense procedures, like doing a backup of your hard drive and recovery drive, disabling secure boot and Windows encryption, dedicating an entire SUB 3.0 hard drive to Console OS and formatting it, sorting out how it works on your particular device.

In other words, the developers must be super-excited while the regular mainstream users looking to play Android games on their PCs are better off taking a few months to go through the release notes step by step.

Console OS might not be the easiest option for the moment, it sure is one of the most promising and far-reaching. If something does not work out from the start, keep digging the extensive FAQs and Wiki for the system because the knowledge base is quite massive and full of workarounds, like supported chipsets, using PCIe to mini-PCIe adapter or USB Wi-Fi adapters.

The currently available release is a KitKat while Lollipop is in the works, and it will be available for Kickstarter backers first, with a lifetime update for free. Console OS Pro will be available at a small yearly fee when it's live later this year.

As far as comparing Console OS to other Android-to-desktop products, it does have a few crucial advantages mainly because it does not run inside a virtual machine, but is a standalone operating system you boot on your machine, that is harnessing the power of your device's hardware. 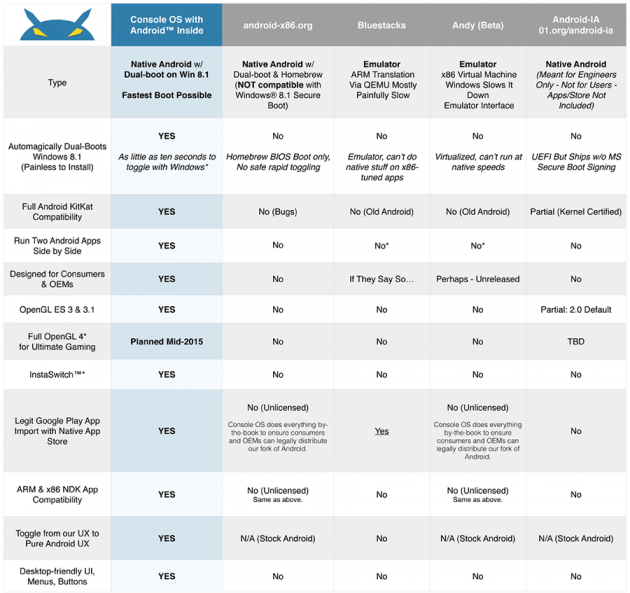 Console OS has a native Amazon store app, and side-loading apk files is On by default, so you can transfer all your favorite games, apps and files to your Console OS hard drive, or external USB 3.0 hard drive and keep it there, loading on any supported machine. Also, it is worth mentioning everything on Console OS will be fully encrypted.

You can install a Google Play store app and use it as you would normally on any Android device.

The company is planning to launch a standalone Console Store for Console OS, with a slew of curated apps enhanced to work on x86 devices.

The operating system does not update itself, yet, so if you want to receive updates, you will need to sign up for a newsletter.

Console OS wants to be your primary PC operating system, but it does not mean you can't boot it from an external USB hard drive. Currently, the OS is in free preview stage, and the list of supported devices may be a bit limited, but it surely covers some of the most popular recent devices sporting fourth-generation Core processors.

It does target touch-enabled devices and PC tablets, but also supports traditional PCs without touch functionality. Console OS sports Secure Boot and dm-verify, and at some point it can go as far as shipping pre-installed on some Windows devices.

Two years of diligent work are finally giving fruit mainstream audience is able to run for FREE, so if you want to be able to run Android OS on your Windows PC or 2-in-1 device as a bootable OS, and possess enough technical skills, by all means try it out!