Auxo 2 for iOS 7 Coming to Cydia Next Month

The developers of popular jailbreak tweaks Auxo and AltKeyboard, A3Tweaks posted a tweet a few days ago about releasing Auxo 2 sometime “within the next month.” Besides Auxo 2, we are likely to see AltKeyboard 2 and two more additional packages on Cydia repositories in March. 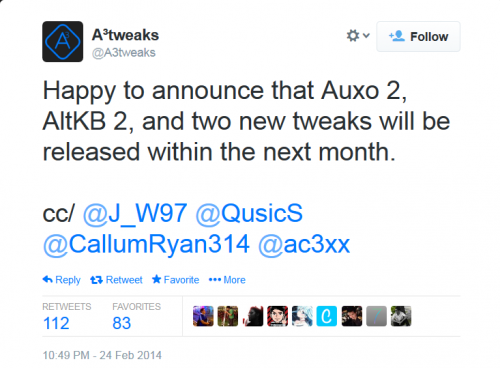 The jailbreak community is perfectly aware of what Auxo stands for because the jailbreak world has welcomed a large number of super popular tweaks that redefine “what multitasking is all about.” Many of these tweaks have proved to be reliable and functional over time, such as Aaron Ash’s MultiFl0w.

Auxo is by far one of the most popular jailbreak tweaks of the last year because it resonated with many users of the jailbreak community thanks to the seamless user interface, immaculate design and enhanced user experience.

The team of A3Tweaks has been leaking gossip about this new release of Auxo 2, and the recent tweet hopefully means we might be seeing an end release date very soon.

The team has also confirmed that AltKeyboard 2 package is due next month, too. The first release of the package offered users of jailbroken devices the unprecedented capability of typing non-alphabetic characters exactly from the default keyboard without the annoying necessity to constantly switch between the various keyboard types provided by Apple. The AltKeyboard tweak currently supports only iOS 6 devices, leaving those who have jumped on the iOS 7 wagon waiting for the release of the second version.

Besides the news about rolling out the two new versions of its most popular packages next month, A3Tweaks has also announced that it would be launching two totally new packages within the next foreseeable future. The team did not provide any further details about the upcoming tweaks, and it’s a hard guess what they may have in store for us. So we’ll just have to wait and see what the developers have been working on all this time.

The due release of Auxo 2 and AltKeyboard 2 is the big news for the jailbreak community, and we will be keeping an eye open for the release of the four packages, so stay updated for the review of the updated tweaks from the Download3K team.