Home
Articles
iPhone 6 Plus Gets Bent Out of Shape, Literally â€“ Will Apple Replace Bent iPhone 6 Plus Models? 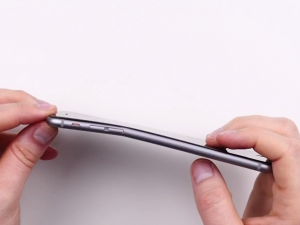 Putting an iPhone in your pocket... it's an action that many of us have come to recognize as “normal” or “part of everyday life.” But for iPhone 6 Plus owners that reality has completely changed. That's right, putting your phone in your pocket is now a complete no-no if you want to ensure that your fancy new phablet doesn't get all bent out of shape... and we mean that quite literally.

The tech sphere is buzzing with complaints from iPhone 6 Plus owners who've been shocked to find that their expensive “largest iPhone ever” is literally warping under the weight of their own pockets.

But just how bendable is the iPhone 6 Plus and is this the world's first fully bendable smartphone over $500? Is it supposed to bend?

First, we can tell you that the iPhone 6 Plus can in fact bend under the right amount of pressure, as this incredibly popular two-day old Youtube video proves:

Not only is bending the iPhone 6 Plus possible, it can actually be done using your bare hands, making this smartphone just a bit more durable than a massive credit card or a standard kitchen utensil (it might be a few times harder than bending a fork it seems?). Well, let's not exaggerate though – it takes a decent amount of pressure to bend the phone – as you can see the man has to exert a small burst of strength to dent the phone in the video above.

The video above and the high number of user complaints created a gossip storm on Twitter running behind the new hashtag #bendgate.

Exactly how much pressure does it take to bend the iPhone 6 Plus?

The exact figures haven't yet been stated, but we're sure someone will conducted the appropriate device testing soon enough. The casing is made out of a very lightweight aluminum that is apparently very conducive to bending and molding.

Perhaps this was an intended feature that was supposed to somehow improve the durability of the iPhone 6 Plus to keep it from snapping? One would hope for that conclusion after finding their brand new phone warped like a toy in their pocket, especially with news that other devices are going for the curved screen look.

But sadly, this isn't that. Nope, this is either a huge oversight by Apple or a massive undersight by consumers, because one of those two parties, and maybe even both to an extent, completely overlooked what would happen to a tiny aluminum case if it were placed sideways in a pants pocket before sitting down.

How does this affect the quality of the device?

Of course, having a bent phone in and of itself is aesthetically unappealing, but can the phone actually break or become mechanically damaged due to bending?

Unfortunately, it is likely that mechanical damage can in fact occur in due to bending in the iPhone 6 Plus, as the device's LCD displays are made of fragile glass panels. Even if those panels don't break, their alignment could be thrown off due to bending, which would then negatively affect the entire display quality.

The worst part is, as you can see in the video above, the bending can easily result in a hard dent of the casing, resulting in a semi-permanently dented iPhone 6 Plus.

What should or will be done about it?

Some owners of bent iPhone 6+'s are so upset that they're asking Apple to issue a complete recall of all iPhone 6 Plus models. After all, a bendable smartphone is a far cry from the “indestructible sapphire display” many enthusiasts were expecting to see. However, it seems the general industry response has been that consumer should expect such a thin and long device would bend under a reasonable amount of pressure.

For now, if you're an iPhone 6 Plus owner you have these basic options for protecting your new highly bendable smartphone:

Obviously, if you already have a bent iPhone 6 Plus, your only option is to have it repaired, which of course creates extra revenue for the repair side of the industry as well, in addition to seemingly making durable smartphone cases. For those of you who already have an iPhone 6 Plus that has been bent out of shape, the real question you're probably asking is:

Will Apple replace a bent iPhone 6 Plus under warranty?

According to a statement made by an Apple support representative to TNW, bent iPhone 6 Plus models do qualify for warranty replacement, which means Apple will replace them under warranty.

However, and this is a big however, Apple will only replace the product without a fee if it passes the “visual mechanical inspection,” which is conducted by the Apple Store representative that the device is presented to in person at your local Apple Store location.

In other words, it will all depend on whether the Apple Store employee you bring your device to choose to pass it on the visual mechanic inspection, which will be up to their discretion. If it does not pass the inspection, then you'll have to pay a repair/replacement fee.

Are all smartphones headed in this direction?

For months this device has been hyped up as the next big smartphone, and now it seems that many consumers are complaining that it is literally curving under pressure, within their own pockets. Yet, some expert analysts are saying that we should've expected to see this happen eventually, as mobile devices are becoming increasingly thinner and many are being manufactured with lightweight, flexible casings.

Some say it was inevitable for the larger 5.5-inch Plus model to come with a curvy, flexible exterior? We're sure there's a joke embedded in there somewhere? The problem is, the type of bending we're seeing on the iPhone 6 Plus model does not look good and it is not safe for the mechanics of the device. The screen itself is not meant to be bent, so even a small amount of bending can drastically affect display quality.

As far as whether other smartphones are headed in this direction, the CEO of Blackberry recently made a slight diss at the iPhone 6 Plus, challenging consumers to try to bend the recently introduced Blackberry Passport at an event in Toronto.

So what do you think? Is this a ploy to get people to buy durable smartphone cases or an overall trend that the industry is moving towards with the use of lighter, more flexible products?


So even if someone wants to and quialifies for a bent iPhone replacemnt, Apple will replace it with another bendable iPhone...
< PREVIOUS ARTICLE
Gorilla Glass vs. Sapphire Glass: Why Apple Chose to Stay With Gorilla Glass on iPhone 6
NEXT ARTICLE >
Blackberry's CEO Disses iPhone 6 Plus, Issues Challenge: Try to Bend a Blackberry PassPort