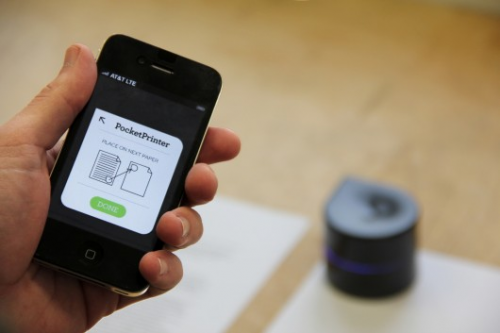 Zuta Labs, a new startup company based in Israel, is set to revolutionize the way we print on paper with the invention of a portable pocket printer that can crawl its way around and print on pages of any size. The brilliant new device will be able to communicate with your smartphone, tablet PC, laptop, or any other electronic device in the same way any other paired Bluetooth device would.

Once the printing data has been transmitted to the mini pocket printer you can place the handheld device on a sheet of paper (of any size or color) and the small robot will slowly and accurately travel across the paper and print as it goes along. All that is needed to make this printer work properly is a flat surface and a blank sheet of paper.

The Zuta Labs startup company just recently reached their fundraising goal of $400,000 on Kickstarter, and the most interesting fact to note is that they just started the fundraiser on April 10th. So in just 10 days this idea has generated enough media attention and backing to successfully raise nearly a half million dollars!

The Kickstarter fundraiser will remain open for pledges until May 10th 2014, and the proceeds will be used to assist with the costs associated with the initial rounds of production and distribution. A $200 pledge will earn you a white copy of the printer (it will be available in white and black) after the production phase has finished. The first batch of mobile printers are expected to ship in Early 2015.

Before the invention of this unique printer there were really no devices that could fit in your pocket and print high-quality text and imagery onto any size paper – so this truly is a first for the tech industry. The inventors at Israeli startup Zuta Labs have been using 3D printers to conceptualize, product, and test a long line of prototypes that utilize different techniques to help the printer stay at the appropriate point on the page.

With every other type of printer ever made you've had to slide the paper through the printer in one way or another – this is an entirely different approach because the printer is simply set on top of the paper and allowed to robotically crawls its way around and print in a preset pattern. The printers will be able to communicate with all Bluetooth-compatible devices that have print capabilities. 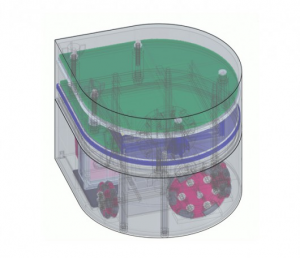 How It All Began and What We Can Expect

Zuta Labs actually began as a student project at the Jerusalem College of Technology as a contestant in the Friedburg Entrepeneurship Challenge. Several engineers and entrepreneurs from the college came together to formulate the idea and brainstorm possible ideas to make the printer a fully functional device.

The final prototype is about the size of a softball and will easily fit within the palm of most people's hands. It is equipped with a set of complex omni-wheels that let it travel in literally any directions in very small increments and with fine precision.

Check out the video below to see the new mobile printer in action: