Zombie Catchers is the funniest zombie game app for iOS! 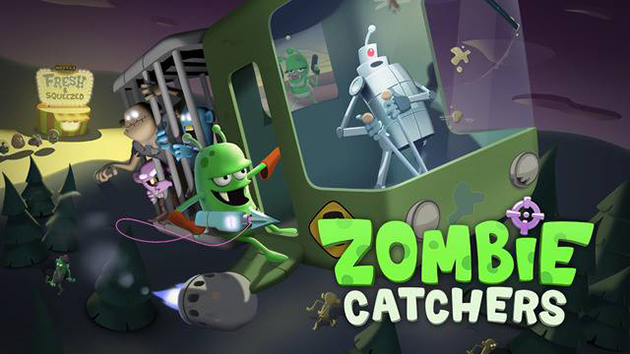 Zombie Catchers, a game that was a true inspiration for writing this review, is probably the funniest game app I've ever played. While the title might seem generic and leave you uninterested, the game itself makes up for it with probably the best zombie plot in the history of zombie games. If you think I’m exaggerating, wait until you hear the premise.

It's true that the past few years zombies have taken the spotlight after the vampire frenzy passed, and although the zombie franchise is still well received by the public, there's not much to impress us anymore… or is there? Two Men and a Dog (developer of Zombie Catchers) thought out of the box and I'm really glad they did. The game focuses more on comedy rather than fear and gore, and it turns the predator into prey in a most comedic way.

The story goes like this: the world is troubled by a zombie invasion. Planet Earth is infested with the undead, but fear not as A.J. and Bud, two intergalactic businessmen, have decided to set up shop on Earth! Together, they plan to catch all the zombies and make Earth safe once more – making a profit at the same time… and how do they achieve this? Well, by selling their juice of course! Yes, you read correctly. Those two gentlemen capture zombies in order to sell their juice in the drive-thru they own, by squashing the zombies!

The whole idea is so crazy and funny and it gets better as you actually start playing the game and get the hang of it. The character you're playing as is a small green alien with antennas, while his sidekick, a robot-like creature, guides you from above. As a zombie catcher you are required to travel to zombie infested areas, and catch the zombies (which isn’t very hard, at least on the first few levels).

Before starting the game for the first time, a tutorial gives you instructions on how to use the controls and the way to catch zombies. Your character has a weapon that throws arrows tied to ropes, so once you hit a zombie it can't escape and is pulled into the flying machine controlled by your sidekick. The way you lure out zombies is fun as well. They're basically hiding inside swamps so what you have to do is throw a brain close to them and wait for them to come out. You do however have to make sure you hide or move a few steps back in order to not be seen by zombies, since that will scare them away. The exclamation marks indicate whether they’re aware of you being near them. When they notice your presence, the zombies start running to both ends of the screen until they hide in a bigger swamp with leaves, rendering you incapable of catching them anymore. 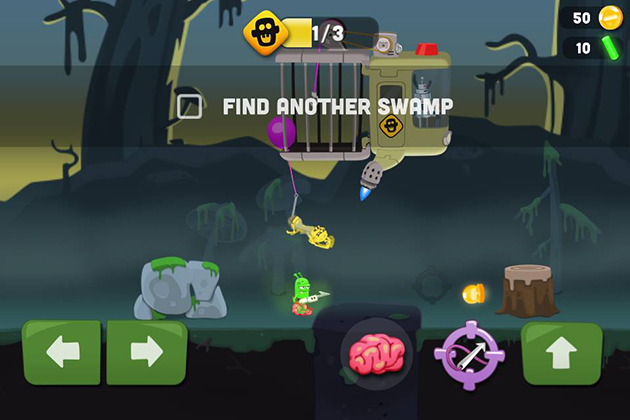 Apart from the typical zombies, there are also zombies who are wearing barrels. In order to catch this type of zombies you have to shoot them more than once, so that the barrel is destroyed- allowing you to catch them normally. Holding down the fire button allows your weapon to gather power in order to cause more damage. Things get harder though when you move from one round to the other, since birds and insects appear (as your enemies), making you faint for a few seconds if you get in contact with them, plus zombies wear armour in higher rounds.

Now, what happens after you successfully catch the zombies? You take them back to the basement of your drive-thru and place them inside the squeezers.  Needless to say, the process of squeezing is hilarious. You can upgrade squeezers so that you can get bigger batches and better products out of the zombies.  With each kind of zombie you catch, you can make a different drink, and each kind of drink has a different profit for you.

The profit translates to coins which is gathered when you capture a zombie and when you sell its juice. Apart from coins there is also Plutonium for speeding things up.

There is also a shop in which you can use your coins to buy weapons and other items. The game also offers in-app purchases. Apart from that, levelling up and moving from one round to the next unlocks new features for you to enjoy. In your quest to find zombies, drones are used to pinpoint their locations. For faster results you can purchase more drones but this costs quite a lot. If you can't buy more drones, you have to wait 8 minutes before being able to hunt again. 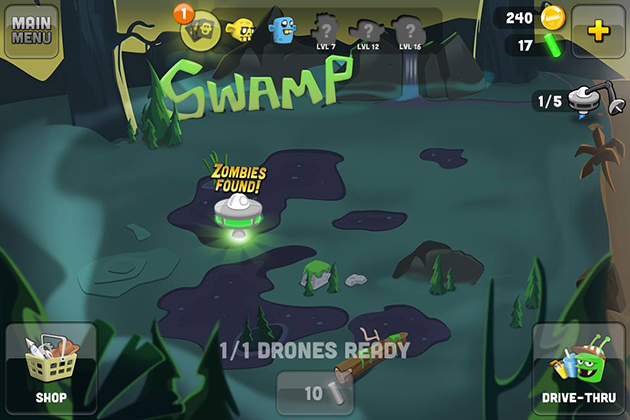 I don't think I have to say more about this game (and I really want to go back to playing it). So, I'll finish this review by saying that Zombie Catchers is one of the most addicting and enjoyable games you'll find for your iOS device… try it and you won't be disappointed! Hopefully it will be released for android devices too; it's a bit sad that android users can't check it out.

It's a must-have game for everyone (ages 12 and above, of course)!