Review: Doppler for Android and iOS

- by My Go Studio Ltd

Doppler is on our list of Top Mobile Games To Test Your Reflexes, but I would add this game will put to test your self-control and self-esteem, as well. Impossibly hard, annoyingly unnerving, Doppler will have you play with both hands grinding your teeth. The game is superb for hardcore arcade players, and those who have enough patience and dedication to master the game's physics. 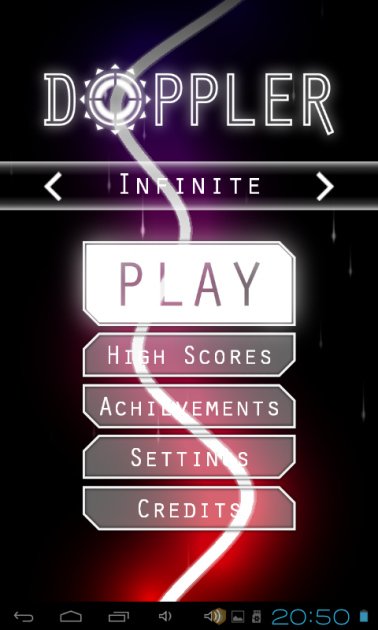 Sit comfortably with your tablet, or smartphone, and position it on the table in front of you. You will need both of your hands, more specific - one finger from each hand. Doppler is set in an abstract pitch-black environment where three protagonists are an electric wave and two dots on both sides of it.

The wave twists and turns, and wiggles like snake while you try to keep the two dots you control with your fingers close enough to one another, but avoiding hitting the wave separating them.

When the two dots are the right distance from one another, they create an electric charge, but when you drive them too far apart, they lose connection you will have a second or two to restore it. If you fail - game over. When either of them touch the wave - game over.

Do I need to tell you it all happens so fast I was ready to weep when I realized 8 seconds will be my best score until my fingers go numb and I finally master the darnestest pace? 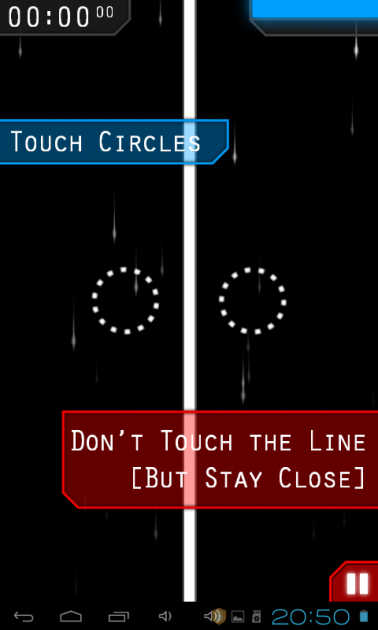 Doppler has what I enjoy most in mobile games - the atmosphere. Even though the visuals are simplistic, they are high quality neon Tron-like, and when mixed in with electronic music, create an intense ambience that will keep you engrossed.

Unlike many other games in the niche that throw loads of visual and sound distractions at you, making it even harder to play, Doppler lets you focus on the main action, but that does not make it a tad easier, no. I was unable to take a more or less action-filled screenshot - it's always a game over before Android captures the screen! 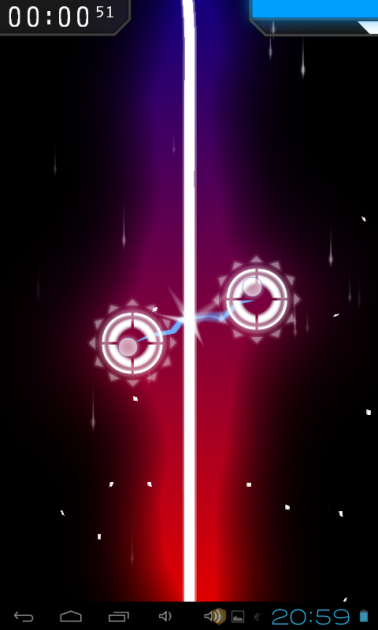 Doppler features three difficulty levels - Infinite, Extreme and Time Attack, each with its own pace. Time Attack features three speeds – Fast, Faster and Fasterer, each with several levels, and you can use this mode to practice the moves because it allows you to keep your own pace, and continue even after hitting the wave.

The 'game over' and 'again' transitions are fast and barely noticeable, so the gameplay turns into a one-time lapse into the electric universe, with recovery hours later. In other words, the replay value is excellent for the right player who enjoys a decent reflex challenge.

That said, I found it even harder to play holding my tablet in my hands instead of placing it on the table. The speed of action required in Doppler is unapologetic. 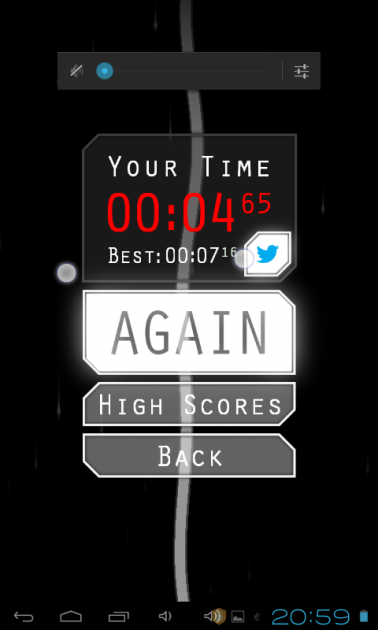 Doppler for iPhone, iPad and Android is definitely the next best entry on your list of impossible twitch reflex games. The game may be more demanding than others in the niche because it is best played in a certain position, but hardcore twitch fans have been singing odes to it ever since its recent release, 'Extreme mode possibly prompting treatment for high blood pressure.' Doppler taps into your brain area responsible for those 'beat your personal highscore' addiction hormones, and the entertainment it delivers is intense and consistent. Get it while it is on sale.