Home
Articles
Oh, The Irony! Facebook Buying WhatsApp For $19 Billion From The Company They Turned Down In 2009

Oh, The Irony! Facebook Buying WhatsApp For $19 Billion From The Company They Turned Down In 2009

Facebook announced that they have reached a definite agreement to acquire WhatsApp, a fast growing cross-mobile platform for $19 billion. Although the acquisition has already begun, Facebook explained in a recent press release that WhatsApp will continue to operate independently and will retain its brand.

In 2013, Facebook was stagnating, while Twitter was rapidly growing. Not only did Twitter successfully complete the IPO, but also launched several new services that have helped the platform grow substantially.

While Facebook has remained the largest social network user wise, they had to act quickly and gain some leverage. In addition to launching the Facebook video ads in January, now they announced the acquisition of WhatsApp, a service estimated to have a messaging volume that is relatively close to the SMS volume of the entire global telecom industry.

Although this is Facebook’s biggest acquisition so far, let’s not forget why WhatsApp is actually worth $19 billion: it includes every communication option in the world and the capacity to connect over 1 billion people. In short, it will be an invaluable tool in the war against Twitter. 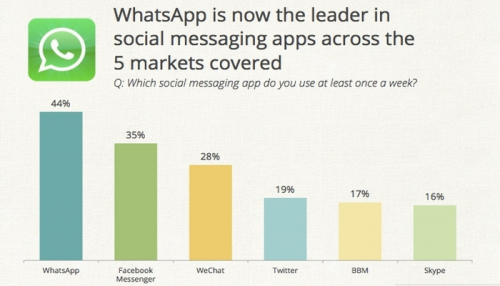 ...and that includes the users. WhatsApp CEO and co-founder, Jan Korum felt the need to emphasize that the service will operate independently. What’s more, he wanted to reassure WhatsApp users that they can count on absolutely no ads interrupting their communication. I found the statement surprising, especially since it’s no secret that advertisement constitutes Facebook’s primary monetization method. Only time will tell if Korum intends to keep his promise, especially since the acquisition earned him a hot spot in Facebook’s board of directors.

As far as Facebook users are concerned, Mark Zuckerberg promised to provide them with great new mobile services with even more options for connecting, in a recent post. Perhaps it’s my pessimism or maybe it’s because I’ve been a Facebook user for several years, but each time they plan to make a major update, they somehow manage to screw things up. Who knows, maybe this time things will be different.

We all love a good comeback story

What is interesting is that both Facebook and Twitter declined the application of co-founder of WhatsApp Brian Acton for a job a few years ago. Four years later, the same man manages to sell his company for $19 billion. It appears that getting rejected for his dream job was the best thing that ever happened to Brian Acton.

In my opinion, this has to be the clearest example of how fate works in mysterious ways. According to a regulatory filing, the deal is being cut for $12 billion in Facebook shares, $4 billion in cash and $3 billion in RSUs for employee retention.

The deal also features a termination fee of an additional $1 billion in shares and $1 billion in cash, which becomes active if the event fails to pass. Considering that this move bolters the world’s biggest social network by at least 450 million users, I honestly believe the acquisition will be fruitful for both parties.