Office for iPad was released back in March and has become one of the most successful Office suites almost instantly. The omission of printer support was perhaps a mistake but this was soon corrected as well. Now Microsoft have released an update for their Office suite of apps for the iPad tablet which makes them even easier to use.

This was the mantra from Satya Nadella CEO of Microsoft who took the bull by the horns and stated he wanted to be multi-platform and fast. This attitude continued recently with the Microsoft “hackathon,” a 36-hour event where Microsoft programmers can work on any software problem they never get the chance to resolve in their usual work time. Better to do this, instead of complaining, was the rhetoric from the top.

These words have been backed up by action with the initial release of OneNote and the Office suite on the iPad. This is the first time since the iPad's initial release that Office apps have been made available for the iOS platform and continues the philosophy espoused by the new CEO. 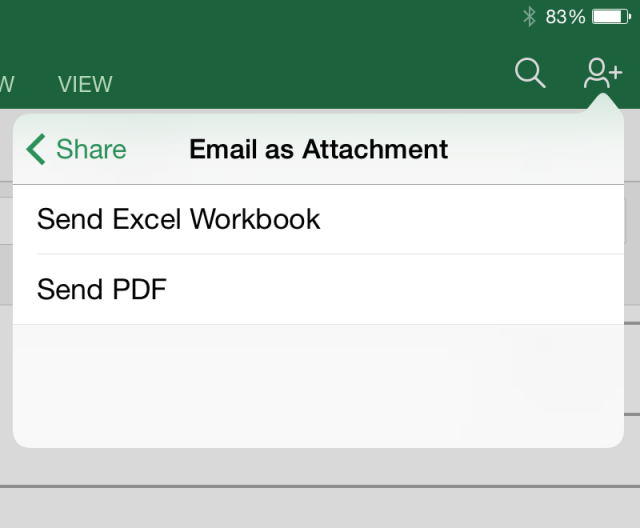 Word, Excel, PowerPoint and OneNote can all export to Adobe PDF file formats from their original Office formats. This is a very useful feature to include for iPad owners who can read PDF files easily on the iPad and can also share them with friends and colleagues.

The new feature is available from the people sharing icon on the right side, as shown in the image above.

External keyboards are now fully supported so a paired Bluetooth external keyboard can be used for many Apple hardware tools and makes entering or amending entries easier than ever before.

A greater range of fonts are now supported to make the best use of the Retina HD display on most modern iPads.

The following program specific improvements have come from the new version of the Office suite apps for iPad. A lot of intelligent new features, modifications and smart changes that will doubtless appeal to users of the Offices apps on their iPad. 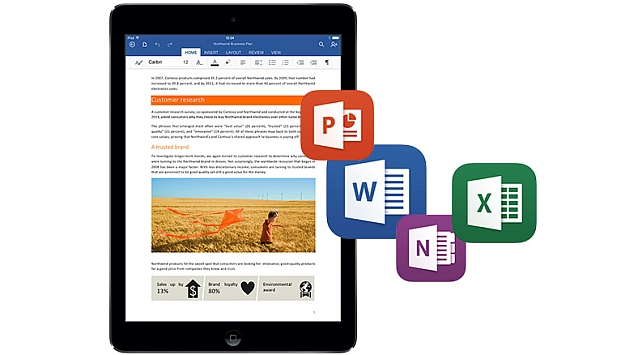 Flick over the selection handle (commonly the column or row name) in any direction to select all of the cells in that column or row. External keyboards are now supported so anyone with a Bluetooth keyboard can use it for the Office for iPad apps. Work with PivotTables that contain source workbook data. More paper sizes and adjustments for scaling up/down have been included in the latest update.

New presenter view lets a speaker view and edit their notes on the fly, view the next slide or jump to other slides while in the middle of a presentation. Play background media such as sound effects, background mood music or video content while presenting PowerPoint slides. Add or erase drawings and highlights on slides. Insert videos into slides directly from your Camera Roll. Add or edit web links for content sources, etc.

Access sections created in OneNote for Windows, unlock them and lock them again. Change section passwords where needed. Move notebooks around, reorder the pages inside a notebook, change sections and work with sub-pages. Copy and paste text while retaining the formatting perfectly from a web page, document or other source. Create notebooks and save them in the OneDrive for business cloud storage. Anyone with multiple accounts can also now pick which account to use in order to save and sync data in OneDrive.

For more on the OneNote improvements across multiple platform, see our article on it.

Excel, Word, PowerPoint and OneNote can be downloaded from the App Store. The apps are designed to work with any iPad running iOS 7. A Microsoft account is needed to view files within these applications and a valid Office365 up to date subscription is needed in order to use the editing features of Excel, Word or PowerPoint.