I have a soft spot for Greek Mythology and that is mainly due to how interesting and exciting it is. It still amazes me, even after years of engulfing myself into it, how well-thought and detailed every aspect of each mythos is, and the message each story wants to convey. Be it gods, heroes, demi-gods, even everyday mortals, their stories attract you to the point of losing yourself while reading about them. Now, imagine taking many parts of Greek Mythology and incorporate to it lots of humor, adventures, puzzles and other mini games. The result is a totally fun game that will have you laughing, thinking, and over again, non-stop. It is definitely a gem worth playing. 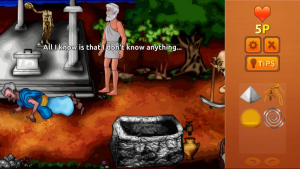 The plot is so crazy and random that there’s no way it will leave you uninterested. So, Zeus, the king of the gods, returns to Earth in a spaceship to save the world! I won’t spoil what’s the eminent danger as that’s something for you to uncover. On his quest he will meet familiar faces from the Greek Mythology and have hilarious conversations with them. Although the game takes place in ancient Greece ((1000-300bc) you will also travel in other timelines and visit a plethora of Aegean islands (e.g. Santorini, Delos, Mykonos, Milos, Karpathos and Crete). Solve many puzzles, and embark on adventures in order to save the planet! Are you up for the challenge?

Zeus Quest is mostly about solving puzzles and interacting with characters to be able to advance forward. The adventure begins at Santorini and from there Zeus travels in many locations of the island. A map on the main menu pinpoints your exact spot and you next destination. From the map you can go back to a location you have already visited by tapping on it, but of course you can’t move on to an unexplored place. 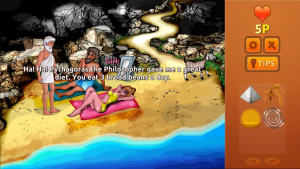 At the right of your screen you will find your life bar (in the form of a heart), your points, the Tips, where you can get help if you’re stuck, and the items that you will collect from the places you’ll visit. Some items are given to you right as the game begins but the rest are your responsibility, as is knowing where to use each one. Luckily, trying to use an item at the wrong situation doesn’t remove it from your list, instead you are given a hilarious message questioning your sanity upon using an item so randomly. To make Zeus move, all you have to do is tap on the spot you want him at and he'll walk there by himself. Also, tapping on an object or person, will open two options for you: a) to take a closer look, and b) to interact, or to pick something up.

Each location has various characters to interact with, some known ones, but mostly civilians who will help you go a step further, as long as you ask the right questions of course. And that’s where the funniest part it, because for each person (or animal…yes they can speak as well), there are many questions to ask them, some having nothing to do with your goal but they are by far more tempting to ask than the normal ones (e.g. asking an old farmer if he needs some...ahem...blue pills). The same thing happens with the inanimate objects as well, e.g. in the early stages you’ll have to make wine and you will need to open the tap for the wine to fill the jar, but except turning it on, you are also given the option to kick it! I think these examples indicate quite clearly what you’ll experience while playing Zeus Quest. 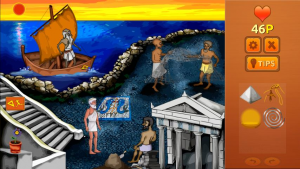 In many cases you will have to go back and forth to people you’ve already spoken with, because finding new information changes the dialogues. Paying attention to what everyone says is very important, and so is exploring all that is around you. The game is very light-hearted but solving the puzzles is not a task that should be taken lightly. It is very easy to miss something thus spending your time trying to figure out what you did wrong, and the realizing you forgot to do or pick something from another place (my personal experience…).

If you run out of life (I lost life because annoyed someone and got punched in the face) you will be given the option to continue where you left of, or start over. Slowly but steadily you will find more clues regarding the danger the world is in and connect the dots. Meeting other people is the game’s highlight for me, due to the amount of funny dialogues between them, which gives them a different perspective than the one we have regarding the personalities of ancient Greeks. Despite comedy being the main part of the game, it is also quite educative regarding the way ancient Greece was like, in both terms of people and locations. It’s impressive how much care was put into creating the world and the people in it.

The game costs $ 4.99 and there are no extra charges, IAPs or anything of the sort. You pay once for the game and that’s it. In my opinion, the care which this game has been handled with, and the remastering done, are totally worth the price. If it’s the kind of game you like, then you won’t regret purchasing it. It is a fair price for the product you get. Also, there is a free lite version, in which you can enjoy part of the game for free and then you will have to pay once to unlock the rest of it. This will help you decide if you enjoy the game before purchasing it. 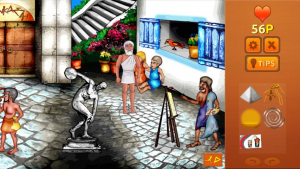 Zeus Quest has been around for many years, but the Remastered version comes with many improvements. This time it is fully animated with 60FPS, vector FHD graphics and even includes voice acting in some cinematics. Regarding the graphics, 2D works perfectly for this type of game and the designs make all characters look comical and likable at the same time. The environments look lovely as well, although both them and the characters are not refined look-wise.

The BG music is funny and uplifting and is a perfect match considering the many funny moments in the game.

For a point and click adventure game, Zeus Quest will please even the most skeptical of you. With comedy and humorous situations being its strong point, I could enjoy it even without a plot. It’s so much fun interacting with characters and every funny dialogue is pure gold. The puzzles could make things difficult for you at times, but the tips are there to help you put everything in order. If you’re a fan of Greek Mythology, and want something light-hearted and funny to keep you company on your free time, Zeus Quest is a game that you’ll love.

It will also be available for iOS devices and other platforms soon after.

Zeus Quest screenshots (above) and trailer (below)

Crazysoft is an indie games company that has been creating games and Apps for more than 10 years. Other of their titles include Odyssey HD, and Lost in The Pyramid. For more information check the official site: http://www.crazysoft.com/index.asp.