Google Maps is undoubtedly one of the most useful tools that Google has to offer, and that’s why it won’t ever cease to improve. Only a few days ago Google added a rather spectacular feature in Google Maps, and now users have the ability to see detailed public transport information in any place across Great Britain. 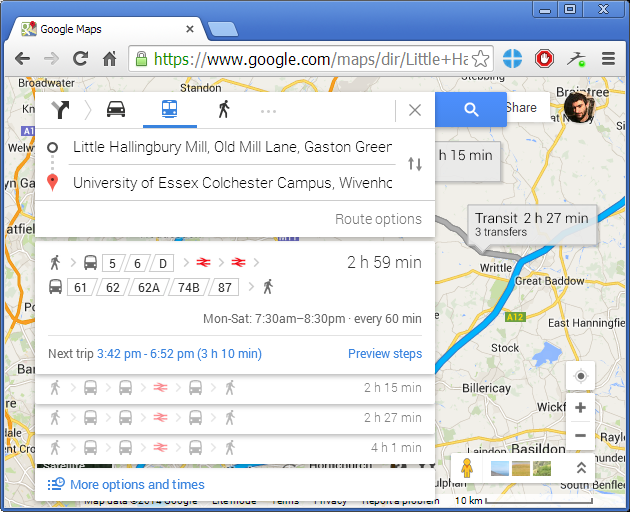 To pull this off Google gathered data for more than 17,000 routes and 34,000 stations, stopping points and ferry ports in the UK- including information on tram, bus, train and ferry schedules. In the past it would be no rare occasion to find a gap between two places when using Maps, i.e. the service would not give you accurate or any information at all on how to travel between those places. But now those holes have been updated and UK residents can even compare different means of transportation in order to select the most suitable for them and their travel.

"It's every single train, bus, tram and ferry right down to the small request stops as well as the major National Express coaches.", said David Tattersall to the BBC, Google’s transport product manager.

Other options in this feature include the ability to see the distance between two places, the route with the least amount of transfers and of course all scheduled departures and arrivals.

One main disadvantage with this service is that it uses data from timetables and doesn’t provide real-time information for any place other than London.

How It Was Done

Back in the 2000, Traveline was created - a service that provided public transport information through the UK and eventually made its data accessible by the public. That data however was not easily controlled and used due to its size and complexity, but that’s certainly not a problem for Google. In fact, the tech giant processes the data and converts into the GTFS file format that can be recognized by its systems (GTFS stands for “General Transit Feed Specification”).

This move will be highly appreciated by iOS and Android users, since they are the main target audience of this service. But there are other apps with similar functionality, such as Rome2Rio. This app in particular provides public transport information for places all around the world.

While this is a big move from Google, it was quite possibly an action from their part to discourage its competitors. Nevertheless, there’s still place for improvement and expansion.