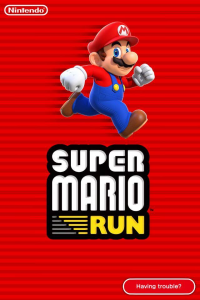 Happy new year! I hope you all had a blast since 2017 begun! First game review of the year and I couldn’t start any different than reviewing the sensation called Super Mario Run that came out for iOS during the holidays. Now, I know that Android users would love to play this game as well, but worry not because SMR is set to be released on Android this year. I don’t know many people who don’t like Mario games, in fact I know none, so I’ll assume we all love it and are excited for this new instalment. Does it translate well on smartphones? Is it worth the purchase? Does it have the same quality as the DS games? We’ll find the answers in this review.

You know Mario isn’t Mario without the occasional princess Peach abduction by Bowser so obviously this would be the case this time around as well. After a letter from Peach inviting Mario to a party in the castle, he arrives only to find she is gone (again) together with the cake. This last part is even more serious and urgent in my book. So now Mario must travel through 6 worlds and many levels to get her back and resume with the party.

As you know, in Mario you start in a map and unlock each world level by level. In Super Mario Run, each world has 4 levels, the 4th of which is always the boss level. The game allows you to play the first 3 levels for free and if you enjoy the experience you can then unlock the full game via IAP. The available game modes are three: the Tour, the Rally and the Kingdom Builder.

The Tour is the main mode where you play to clear levels and the Rally is a mode where you compete against an opponent to see who can collect more coins and defeat more enemies, and most of all who can attract more Toads. Toads are important to create your kingdom and built houses similar to the bonus levels that you find in the other Mario games, through the shop by spending the coins you collect in-game. The more toads you have the more your castle levels up. I found this feature very clever and fun because the player can actively take part into creating a small world of their own instead of having everything set from the start. You will also receive gift boxes from time to time that hide useful items such as the Rally Tickets that allow you to participate on the Toad Rally mode. 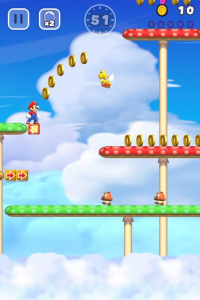 Let’s move on to the main mode, the Tour and see what remains the same as the other games and what has changed. First of all, just like the name suggests, in this game Mario runs which means you can’t control when he stops neither can you make him go back to a previous point. In this aspect it is more of an endless runner than the usual Mario. Also, when coming across enemy creatures Mario will automatically jump over them unless you jump in time to stomp them and receive the coin that comes with it. Apart from these, Mario performs basically all the actions that we’re used to. You jump by tapping once and tap and hold to jump higher, you collect coins, you hit blocks to get power-ups or more coins and you collect special coins that give you more points. If you collect all of them you can replay the level and this time around you can collect more special coins of different color each time. The black ones are really hard to collect though so be warned.

The usual suspects are once again here to make things hard for Mario and the only thing that looks different is that you play vertically and not horizontally. I have to admit I was holding my phone the wrong way and was trying to figure out why the screen won’t change. It is quite a challenge to play in this new way but it works well and it is very easy to get used to. The levels themselves don’t have something new or unique about them compared to the past games but this is not a bad thing. Instead I think it is smart to use the traits that made Mario famous because this is the first attempt on smartphones and players like myself wanted to experience the same joy and feel at home with this game. My only complaint is that the levels are not long enough, at least not compared to what I was used to, but the fun and excitement are there albeit is smaller doses. 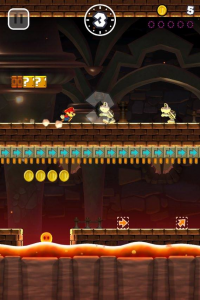 The only purchase you can make through IAP is to unlock the full game for 10$. Everything else requires the game’s currency and good skills. 10$ might seem a lot but considering the franchise and the content you are getting it is not an unjustified price. Also the 6 worlds will most likely not be the end and more will be added in due time although I cannot say if a new purchase will then be necessary.

Appearance-wise SMR couldn’t be anything but flawless. The colors and 3d designs are what you would expect of a company of this caliber and I can’t disregard how smoothly it runs even in iPhone 4s which took me by surprise and I can’t help but appreciate the effort Nintendo took to make this game accessible from devices that are not exactly new. The music and sound effects are of course the same classic ones that we all love.

Considering that this is the first time Mario arrives in smartphones, it is a very good start with a very polished and fun game that respects its legacy and the players. It doesn’t disappoint and instead has set the bar high for the next installment. I suggest you give it try and decide if it worth purchasing depending on your standards. Unfortunately, Android users need to be a little more patient to have it in their hands. Let us know your thoughts and impressions in the comments below.

Super Mario Run screenshots (above) and trailer (below)