Game Review: Solve the mysteries and murders in Danganronpa 1 & 2 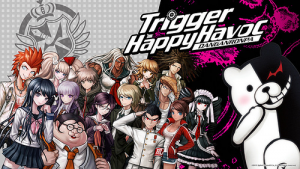 The universal release of Danganronpa and the great success that this dark Visual Novel has been, was the reason we also got Danganronpa 2: Goodbye Despair in this part of the globe and needless to say, this sequel to Danganronpa's first part, also received excellent reviews, proving that Adventure Visual Novels deserve more attention and appreciation. Luckily for us, the third installment of the game, Danganronpa V3: Killing Harmony,  will also be released in September 2017, and in light of these wonderful news, I thought it is a good chance to review these VNs that remain among my top 3 favorite VNs.

In both Danganronpa games you start as a student. A student who has earned the opportunity to attend Hope Peak's Academy, one of the largest and most successful academies of Japan, in which only those who are the best in a field have the right to enroll. From the very first day of your studies, however, things are not going well. Upon your entry, you and your classmates will have to deal with things not quite usual for students, in a school where the inexplicable happens and a small cyborg teddy bear, Monokuma, is in charge. 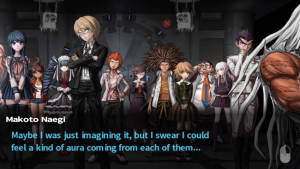 This cute yet terrifying teddy bear claims to be the director of Hope Peak's Academy, and demands that you comply with his overly rigid regulations. Whoever doesn’t, will be punished. And by punishment he doesn’t mean a simple detention or a paper of apology. His insatiable thirst for blood quenches only with very violent deaths. So, Monokuma tells you that your life from now on will be inside the walls of the academy and the only way to get out of it is to graduate. But graduation for this school means a classmate’s murder. If you manage to do it without being revealed, the doors will open for you. If not, death awaits you.

The goal of your character is not simply "graduation", but the investigation of the case as a whole and the reveal of the secrets that this evil bear, the director of the best Academy of the country, hides. During this search you will become the witness of abominable murders and study them thoroughly to find the perpetrator. In the background though, an unexpected scenario unfolds that will leave you speechless.

Danganronpa: Trigger Happy Havoc consists of six chapters and about 20 hours of gameplay, while in Danganronpa 2: Goodbye Despair in a similar number of chapters you will need up to ten hours more to complete it. Each chapter is divided into two parts with a murder taking place between each. 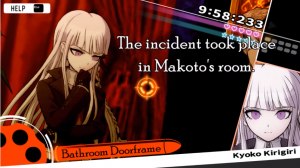 In the first part of each chapter you will need to strengthen your relationship with your classmates. This means spending time with them, learning about their lives or giving them gifts that you buy with Monokuma Coins from Monokuma store. The more you tighten the relationships with your classmates, the more skills you will acquire. But do not think that you will be able to get close with everyone. Time is very limited and you have to choose carefully. In the second part of each chapter, things get a little more complicated.

Whenever a character is found dead by at least three people, Monokuma makes an announcement informing you of the beginning of the investigation, and you will have to collect as much information as possible within your limited but sufficient time. You'll have to move to all the available places, which as you progress will increase (floors or doors previously locked will now be open) to make use of the available information. Most items will be taken from the crime scene but there are some that you will need to find yourself. Any evidence you collect will later be used as “Truth Bullets” during the trial.

The final stage of each chapter includes the trial. A trial where the jury are you and your classmates and the murderer is among them. In case he is figured out, he loses his life and you continue your adventure. If you fail, he "graduates" and you say goodbye to your life. Having this in your mind, you make use of the skills you have and start the conversations with your classmates. During these discussions, white letters will be displayed, stating each person's point of view. Sometimes there will be other colors in which case you should use your Truth Bullets to find out the truth. There are also many mini games you will need to take part in during a trial that require speed and quick thinking. If you make a mistake, your energy is reduced and if you lose in a mini game you will need to repeat it. At the end of each trial you will receive the score and points, which are Monokuma Coins, used for purchases. 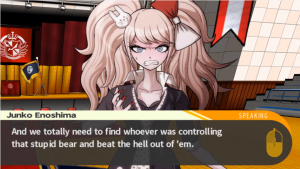 When you complete both games you are offered additional modes in which you can learn more about the world you’re in, as well as everything about the characters involved in each story.

The characters designs are amazing and a treat for the eyes. They are all designed like anime characters and they are in 2D. Every character is unique and stands out for their exaggerating look. The 3D cut-scenes are very well-designed and manage to blend perfectly with the 2D graphics. The music plays non-stop in the background and is very fitting to the game and the voice acting top-notch in both English and Japanese.

The original script, well-crafted characters and of course Monokuma are very good reasons to play the Danganronpa games. There are also anime versions available and I suggest you watch them after playing the games. If you are a fan of Visual Novels, you will find Danganronpa to be one of the best of its kind and if you are among those who want to try something new and enjoy a good mystery with twists, then Danganronpa could be the game you need. Let us know your thoughts and impressions in the comments below.

Danganronpa screenshots (above) and trailer (below)