Game Review: Ken Follet's The Pillars of the Earth [PS4, Xbox One, PC]

The best-selling medieval novel by British author Ken Follett, which also became a mini-TV series, is now a 2D point & click adventure developed by Daedalic Entertainment, a studio that has earned several positive impressions with their adventure titles like Edna & Harvey: The Breakout and Silence.

The 1000-page novel will be released as a video game in three chapters, each with a different release date. The first chapter of the promising project called "Book 1: From the Ashes" was released on August 15th. The second part, called "Vow 2: Sowing the Wind", is scheduled for release next December, while the third part called "Book 3: Eye of the Storm" is expected to be released in the first quarter of 2018. 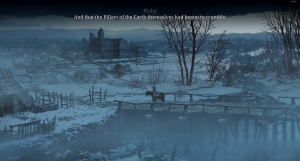 The case unfolds in 12th century AD England. At the time of the civil war for the succession of King Henry I, a time that remained in English history as "Anarchy". In the forests near the fantastic Kingsbridge village, the builder Tom Builder, whose dream is to build a cathedral and now he is unemployed and homeless, wanders with his family trying to survive in the cold looking for a better life. Ellen, along with her son, Jack, live in the same forest, away from civilization. Abbot Philip of Gwynedd visits the Kingsbridge Monastery, where he will be involved in a story of political and religious intrigue. At Count Bartholomew of Shiring, Aliena's beautiful daughter is surrounded by aspiring suitors who she rejects. One of these, however, is William Hamleigh, an awful noble.

The stories of the protagonists whose role you play (Tom, Philip, Aliena, Jack) start separately, but then interact and engage with each other, leading to the complete narration of the construction of the Kingsbridge cathedral and their involvement in th intrigues and political games in the monastery. The scenario is amazing, with extraordinary character development and the way in which segmental assumptions that together make up the main story will make you wonder whether you are playing a video game or watching an animation movie. 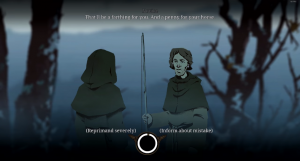 Pillars of the Earth is the typical point and click adventure game. Keeping the spacebar down, you see all the points, characters and objects you can interact with. By right-clicking, the thoughts of your character for the specific thing are displayed in text format, giving you some help in using an object or in selecting a dialog with a character. Along the way, you find items that you can collect and store in the inventory and serve you in solving puzzles or offering you dialog options.

The puzzles in most of them are quite reasonable, but sometimes they become tedious and long-drawn without giving any evidence of their solution. Many of the choices you have as to what to say or do have little to great impact later in the story, from minor and insignificant consequences to a change in the ultimate fate of some characters. The total duration of a playthrough of the first part is around 6 hours, but it can be more, depending on how long you will spend on solving some puzzles. The different outcomes of the story due to your different decisions are quite likely to lead you to extra playthroughs to see different versions of the story development, elevating the strength of the first part of Pillars of the Earth.

The Pillars of the Earth is available for PS4, Xbox One and PC for $30 for a season pass. 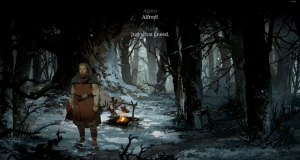 Everything is so detailed and well-designed that will leave you in awe. The signs of time in wooden constructions, the shuffling of snow in the soil, the shades of the sky and the detail of the stone buildings are only a few of the elements that make landscapes and scenery the perfect artwork. The characters originally give the impression of cartoons and stand out from the background.

The voice acting is also top-notch, with a variety of British accents, local dialects and Ken Follett's own participation. The sound effects are convincing and realistic, transmitting the climate of medieval times, enriching the immersion. The musical investment has been performed by the Prague Philharmonic Orchestra and the result is beautiful and fitting to the whole atmosphere.

With good visual design, voice acting, music investment and script, it is definitely worth a chance. If the slow-moving issues (especially at the beginning), many "over-the-fold" and tedious puzzles were resolved, we would talk about a top adventure. Despite its flaws, especially for the price in Steam (which includes future chapters), Pillars of the Earth is an immersive adventure experience that I highly recommend to fans of extensive adventure games and lovers medieval history. Let us know your thoughts and impressions in the comments below.

The Pillars of the Earth screenshots (above) and trailer (below)