Home
Articles
Game Review: Help a designer escape from his blueprint in Eraser!

Game Review: Help a designer escape from his blueprint in Eraser! 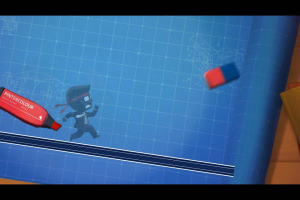 Designers have it hard, that’s for sure. Deadlines, difficult designs, long working hours and the list goes on, but the way Eraser handles their ordeals is delightful and full of challenges. Previously we reviewed another great game by Hiker Games, Gleam, which you can read here and this time we got into an even more exciting world, this of Eraser. There are many aspects of this game that makes it stand out and we’ll analyze each and every one of them later in our review. Gleam was beautiful and unique, but Eraser manages to capture the interest in its own extremely fun way.

The main hero is a designer who upon working on a blueprint gets sucked inside his own work and finds himself in a world full of platforms, obstacles, weird creatures and most of all, chased by a huge red mark that aims to wipe him off. In this unbelievable situation, do you have what it takes to guide the designer and help him finish the blueprints and escape this nightmare?

Eraser is a 2D puzzler platformer in which the player acts as an eraser to manipulate all items and many of the obstacles that appear in order to help the mc move forward and reach the finishing line unscathed. Everything takes place inside the designer’s blueprint and each level takes you on a different part of it. There are a total of 12 chapters and over 70 levels for you to explore. 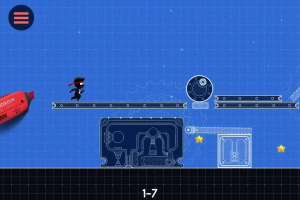 The mc runs by himself and there’s nothing you can do to control him. Your objective is only to erase the necessary parts to open paths for him or give obstacles and enemies a different direction to avoid contact with the designer. Everything needs to be taken care of quite fast because the red marker moves slowly but steadily towards the mc.

The controls are simple; all you need to do is swipe your finger on the part you want erased, e.g. white blocks that prevent you from moving forward, or platforms that need part of them erased to allow the mc to walk on them, or ropes and many more. Keep in mind that you can only erase white obstacles and not the black ones that lie around. You will also need to act smart and use physics to be able to proceed, e.g. creating ramps and calculating where the mc will land after a jump. Spikes, black figures and even bombs are among the many dangers that you’ll meet as you advance, all very keen on wiping you out.

There are also 3 stars on each level and you’ll need to collect as many as possible in order to have the necessary number for unlocking a new level. Sometimes it will seem impossible to collect all 3 and there’s no need to replay a level if you’re missing one or even two. Your aim should be to advance at all costs and if in the end you need more stars, you can re-play the levels that seemed easier on a chapter and try to get a perfect score. 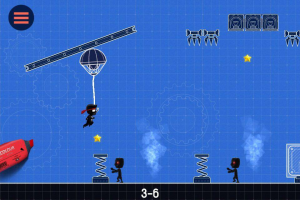 Lives are not an issue in Eraser as you can play as many times as you want without limits. This is extremely generous and actually makes a loss count because basically it works like a trial to see what a level includes, and what to change or re-do on your next attempt. There was not a single moment of frustration while playing Eraser and I’m sure this will be the case for most of you. A hints option would be very welcome though, as sometimes it is hard to figure out what to do and it will take lots and lots of failed attempts before finding out the solution.

Similarly to Gleam, Eraser is also completely free, with no annoying ads or in-app purchases. You can contribute to the developers’ team if you feel like it and that’s about it. Their dedication and respect for the player makes it worth donating to them and help them create even more amazing games in the future.

As we mentioned earlier, Eraser is a 2D puzzler and the graphics are fantastic. The blueprint and the designs are very detailed and very similar to the way they would be designed if it was an actual blueprint. The colors used are limited to blue, white and black. The only exception to this is the red marker that because of its distinct color and size stands out and despite being the arch-enemy helps break the monotony caused by the few colors present. The designer is adorable, tiny and the seriousness with which he tries to overcome the hazards makes him even more likable. The music reminded me a lot of the James Bond films and that was a pleasant surprise. 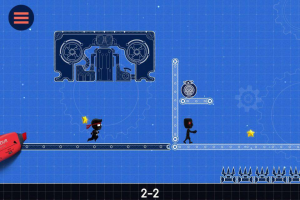 Eraser is a puzzler that knows how to keep your interest going and make you come back for more. It is addicting and altogether a very enjoyable experience. Its difficulty increases steadily and it is for the most part very fair, the only exception being how hard it is to collect all stars in many levels. Give it a try and you won’t regret it. Let us know your thoughts and impressions in the comments below.

Eraser screenshots (above) and trailer (below)