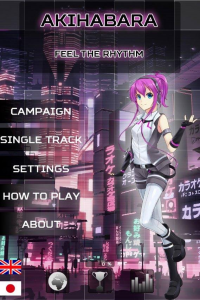 As an avid Japanese culture lover, and anime/manga fan, I can’t wait to visit the most famous districts in Tokyo, especially the Mecca of electronics and anime, Akihabara. Basically a heaven on Earth for all those whose hobbies are related everything related to the aforementioned things. For that reason, I couldn’t keep my hands off of AKIHABARA by indie studio JMJ Interactive, a rhythm game that has just been released and promises to offer an amazing musical and gameplay experience.

If we remove the music element from the game, we have a puzzler that combines tetris and match-3 games. You have rows of icons of different shapes (squares, circles, cones) and colors, and with each row that appears you get an icon at the top of your screen that shows you in what shape you can turn one of the already existing icons on the row. You have to act fast though, because the rows move fast and after changing an icon you can move on to the next, again according to what appears at the top of your screen. To choose which icon on your row you want to change you have to tap on it at the exact moment the Beat Marker, a horizontal line, that passes over them on the grid. So, unlike Tetris in which you change the shape of the tiles, in Akihabara you change the icons to match those that are already positioned at the bottom of the board to create matches of three or more. When you successfully match 3 or more icons they disappear thus making more room for you to continue the game.

Your score is not only raised by how you well you do on that aspect but it also depends on the music element, because first and foremost, Akihabara is a rhythm game. If you sync your actions to the music and tap on an icon at the right moment you will get either a “Good” or “Perfect” score multiplier bonus. The trick is to decide fast which icon needs to change and tap on it right as the Beat Maker passes over a grid line. In addition, if you achieve bonus scores consecutively you will be able to activate a power-up called Super Icon which can destroy a large amount of the existing icons. 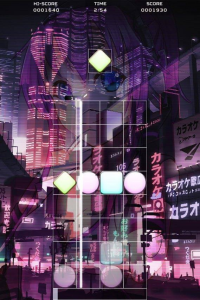 However, mastering this game will prove to be a challenging task because you will need to be very fast and improve your reflexes. Choosing an icon to change is not hard by itself but it is easy to make a mistake because it all depends on king your move when the Beat Maker passes over that exact icon. Also, even though the beat works in your favor and helps you time your actions based on it, at first it is rather hard to focus on it. After you get the grip of the game though, it all becomes clearer and you will be able to organize and time your actions.

Akihabara has two modes; the Campaign mode which has 10 levels available, and the Single Track mode which consists of levels that can be unlocked through the Campaign mode. Each level has unique upbeat music to go with it and it is by far one of the best rhythm games I have played.

Akihabara plays with the opposites in terms of appearance as it has a dark background and very bright and colorful icons. Its mascot is very likable and I love her anime design and the fact that you can change her outfit. But of course where the game shines is the soundtrack. The EDM beats are fantastic and very addictive even to people like me who don’t fancy EDM a lot. You can easily tell that lots of work has been put in that department and the quality is top-notch.

In conclusion, Akihabara is definitely one of the best rhythm games available and it incorporates successfully the match-3 genre into it, creating a unique experience and a challenging gameplay. If you enjoy rhythm games then Akihabara will certainly live up to your standards. Let us know your thoughts and impressions in the comments below.

Akihabara screenshots (above) and trailer (below)