Home
Articles
Game Review: Angry Birds 2 - The Birds Are Back and They Look Better Than Ever!

Game Review: Angry Birds 2 - The Birds Are Back and They Look Better Than Ever! 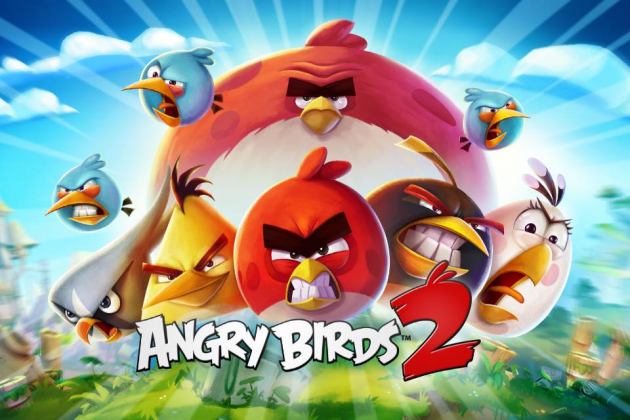 Angry Birds is a franchise that spans several games, cartoons and merchandise and has been around for about 6 years. During all this time it released a large number of spin-off games that belong to various categories, while still remaining faithful to its story. The developers experimented a lot, tried different themes, always keeping up with the latest game trends and always staying relevant. While it might be true that it has already peaked, one can’t deny how extremely successful it still remains simply by taking a look at the numbers: Angry Birds 2 reached 1M downloads only 12 hours after its release, as stated by Rovio itself! This proves how loved it still is, and why it’s really hard for fans to stay away from every new release. Angry Birds 2 might sound a bit weird considering there have been so many games that came before it, but although it’s the same with its predecessor at its core, it has some new elements and improvements that make it stand out.

But let’s get to the good stuff, shall we? 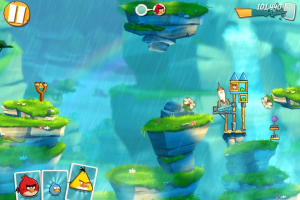 Angry Birds wouldn’t be the same if the story took a different turn now, would it? Pigs, lots of angry birds, destruction and even more destruction. Yes this is what you should expect from the comeback of Angry Birds. Go after the pigs that stole the eggs and turn everything to dust! Magnificent new locations and piggie bosses await you to ruin them!

You must be wondering what’s different in Angry Birds 2 and if there's anything new added to the franchise? Honestly, in terms of gameplay it’s almost the same as what you’ve known up to now; you aim and shoot Angry Birds at the piggies’ fortresses, trying to bring them all down before you run out of birds. So what’s the reason to try it?

Although it’s true that the goal is the same, many things have been improved or changed altogether compared to previous games. First of all you will notice that the levels and progression is shown now in a form of map similar to the Candy Crash map, where you move one step after clearing a level successfully. You also receive daily gifts the same way many games reward the player for logging into the game every day. 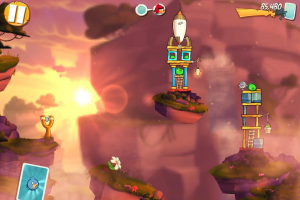 Now, on to the more important differences. The most notable one, is the addition of randomly generated levels, which means that every time you restart a level there are certain things different than previously. Not everything changes, mind you, but mainly the piggies’ fortress and the birds you play with. This affects the whole game and turns upside down everything you were familiar with up to now. You can no longer improve your strategy and use the best bird for the best spot to aim, but instead you have to start from scratch with a new set of birds and enemy base. It certainly adds more spice to the game and forces the player to improvise with every new try.

In addition, the life system of Angry Birds changed noticeably as well. You are now given a fixed number of lives, and failing to clear a level costs you one. Then you’ll have to wait 30’ for the refill, or you could jump to the IAP store and buy your share. You can, however, watch videos to get a free bird after a match when you run out of them, or spend gems (game currency) to get the full set of 3 birds. In Angry Birds 2 you are also given daily quests such as collecting an x number of stars, or popping an x number of pigs, which rewards you with lots of gems if you complete them. Spamming friends on Facebook is also another way of getting rewards. 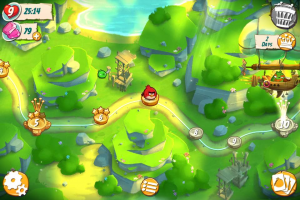 As you can see, Angry Birds 2 has completely joined the F2P side and judging from the reception it got, it was a clever move to make. Things have changed since Angry Birds first came out and now Freemium games is the new trend. Following this route can only mean success for a developer but only if done right and with optional, not forceful, IAPs. Luckily, Angry birds 2 avoids all the high-risk zones and treats the player with respect.

The IAP system is optional and includes only purchases of the game’s currency. You can purchase different amounts of gems from fairly cheap to very expensive ones. Gems are important for buying lives or power-ups but the game offers many alternatives for getting gems such as daily rewards, which as a result doesn’t force you to use the IAP. Thus, my remark earlier of Angry Birds 2 being a freemium done right. 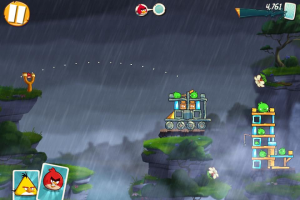 The graphics have always been beautiful in Angry Birds and in this new installment things couldn’t be different. The smooth animation, crystal-clear graphics, detailed designs and of course gorgeous locations with depth and a variety of color pallet. It is definitely a treat for the eyes.

The sound effects are as funny as always in both birds and piggies teams. Even up to now I still can’t decide which ones I enjoy more! All your familiar sounds are back to add more fun in the experience.

Whether you’re bored of Angry Birds or not, whether you’ve deleted any of their games or haven’t touched them for ages, as long as you can recall how much fun it was aiming and throwing the birds of destruction to the enemy piggies’ fortress, then you must do yourself a favor and download Angry Birds 2. It’s a true sequel, a return to the roots and it’s as free as an Angry Bird game could ever be. It’s not perfect, but it is improved in all the aspects we analysed earlier and although I have also been skeptical myself, wondering how entertaining another Angry Birds game can be, the result really took me by surprise. Give it a go and let us know your thoughts on it in the comments section below!