Not long after Mozilla released their latest Firefox version 35 as a Stable release have had to patch it for a slew of software bugs discovered either before the release or after it, and now patched.

The release notes provide a more detailed breakdown from Mozilla on all the issues that have been addressed by this release.

The main issues that some users were having with the Firefox 35 release that came out 16 days ago was that several add ons where no longer functioning including major ones like Adblock Plus, Ghostery and Session Manager. 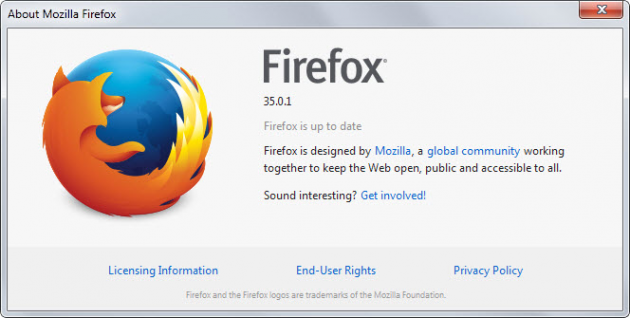 It is possible to simply update Firefox through the software directly:

Alternatively, users can elect to download the newer version of Firefox and manually install it. Or they can use sandbox software or a virtual machine to download and install the new version in a protected area before installing it directly on their live Windows installation if they are concerned.

Here are a few of the major issues that were resolved with this update:

A startup crash that affected Firefox 35 on a small percentage of installations was fixed. Rendering issues on certain web services like Open Street Map showed up due to the use of types of SVG / CSS animation which has now been resolved.

People accessing GoDaddy webmail were experiencing Firefox application crashes (the support team over at GoDaddy must have loved Mozilla!). Online editors may also have been affected but these issues are now believed to be fixed for both.

Text selection in right to left languages was not acting correctly when selecting text from the address bar.

A full, detailed list of the issues resolved can be found on the Mozilla release notes for 35.0.1.

Mozilla have been innovating more with Firefox lately and new releases have been coming faster than ever. Their cross-browser video chat Firefox Hello was integrated into this latest version of Firefox which features WebRTC support.