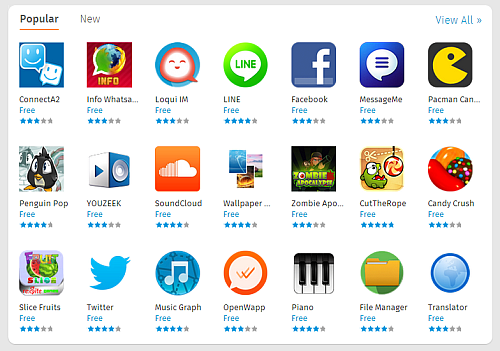 Eager to step out from the shadow of its ever popular Mozilla Firefox web browser, the Mozilla organization is stepping boldly into OS apps that run on Android as well as its own upcoming Firefox OS.

The apps are hosted within the Firefox browser, but can run natively on Android. An Android installation package (APK) can be created via the Firefox Marketplace for developers to develop their own versions of their apps.

The marketplace started off with only four apps but has quickly grown. It is not only unknown apps either, with prominent ones like SoundCloud, Facebook, LINE and Twitter already putting in appearances.

To install an app, the user must be visiting the site via the Firefox web browser. This is true whether they are coming from a desktop or mobile environment.

The Firefox Marketplace will look immediately familiar to users of either the Play Store or the Apple App Market. Clean lines, minimal information, screen capture previews, description and more.

It is necessary to use a new version of Firefox in order to access the Firefox Marketplace. The installation process is similar. Apps will be loaded into the app tray as normal. The only difference is that the already installed Firefox Gecko engine will be running the apps when they are loaded up.

Firefox web browser and Firefox OS both run on the Gecko rendering engine, whether the browser is running in Windows, Android or the Firefox OS. This unified approach makes it easier for Mozilla to offer Android apps that will run on their system.

The changing approach to app development from using difficult to learn coding languages over to a combination of HTML 5, CSS and Javascript means that any apps made using these latter 3 languages run on any compatible system. All Firefox apps are coded using these modern computer languages, so they are truly cross-platform compatible.

To help speed-up adoption, Mozilla has released a WebAPI and full documentation to help new developers easily connect to a mobile device and access the battery statistics, sensor information, camera actions and more. This makes accessing key device functions faster which speeds up app operations and stops every developer needing to develop their own routines to perform simple repetitive tasks that many apps commonly need to do.

Time will tell whether Mozilla can make a sizable dent in the exploding Android app market.