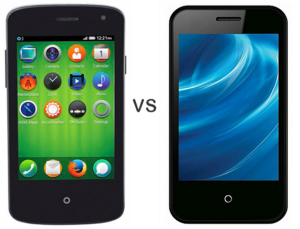 Mozilla Firefox has always been viewed as a superb browser, commonly held at the top with Google Chrome and Safari in favor over the ancient Internet Explorer and less-known Opera. This year however, Firefox is starting a product movement that could change what the company is best-known for in the coming decade.

For a while Mozilla has been talking about the goal of producing a smartphone for the developing world that would run on their proprietary Firefox OS mobile operating system and cost only $25.

The big idea is to equip the more than 1 billion people who do not yet have mobile devices with a smartphone that costs the same as a feature phone but can do so much more, like connecting to the internet and running apps - capabilities that could drastically speed up advancement in developing countries.

Well now that day has finally arrived, with two companies in India launching the first two $25-$35 Firefox OS-based smartphones – the Fire One Mi-FX 1 from Spice, and the Cloud FX from Intex. Both of the phones are very similar, being that they're based on the same reference design recommended by Mozilla.

Before we compare the first two $25-$35 smartphones the world has ever seen, we should tell you that they're only available in 18 countries right now and they have not yet reached the U.S. market. With that said, there is a good chance we'll see similarly priced smartphones from Mozilla hitting the global markets within the next couple years.

Prepare to be surprised at the specs these phones offer in the $25-$35 range:

The Cloud FX from Intex vs. The Fire One Mi-FX 1 from Spice

As far as video playback quality goes, the phones only support 240p and 480p – resolutions higher than that aren't recognized by the built-in media player.

Both phones are equipped with capacitative touchscreens, both have dual SIM card slots, and both have expandable storage slots for microSD cards up to 4GB.

These phones are very similar. If you're having trouble choosing one, don't spend too much time worrying about it - both are going to offer a similar experience; although if you insist on having a phone that is easy to take selfie pics with then the front camera equipped Fire One would be your best bet.

Still, we must warn you that the picture quality of the Fire One's 0.3-megapixel prehistoric front camera is quite horrendous, so it isn't much of an advantage really, especially when you consider the fact that the Cloud FX's 2.0MP primary camera has more megapixels than both the cameras on the Fire One combined.

The real perks here have almost nothing to do with the hardware and everything to do with the pricing and, perhaps even more importantly, Mozilla's absurdly lightweight and efficient Firefox OS, which somehow manages to make such poorly equipped low-level devices run well.