There is no denying the fact that the cloud storage market is starting to really heat up. With millions of users across the world getting acquainted with the convenience of the cloud, cloud vendors like Google, Microsoft, and Dropbox are doing their best to compete with each other. For a while now, it has been primarily Google and Microsoft making the changes to their pricing structure and plans, but Dropbox recently announced a major change to their Pro packages.

If you are at all familiar with Dropbox Pro, you know that they used to offer a variety of different options for Pro users. You could spend between $10 - $50 a month for varying amounts of storage. Now, there is only one price, it's $9.99/month or $99 for a full year. That plan comes with 1TB of storage, which is more than Dropbox previously offered with it's $50/month package. Obviously this is a major win for the users, as everyone is getting an increase to storage, and some users are even getting a cheaper monthly bill.

Along with the increased storage capacity and reduced prices, Dropbox also implemented a handful of new features. First, they added some much needed features to link sharing, including password protected links and expiration dates for shared links. Previously, you could share a link to any file in your dropbox, but there was no layer of security to prevent this file from being shared across the web. 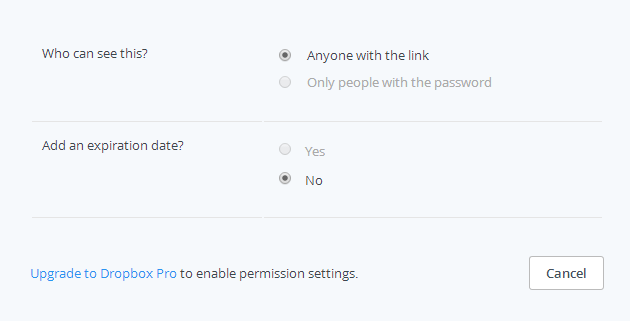 Dropbox has also added more detailed folder permission options, allowing users to designate which people can view a folder, and which people are able to actually edit the files in that folder. Another security feature included is the remote wipe ability, which allows you to wipe files from a device under your dropbox account remotely. This means if you use your desktop to disconnect Dropbox from your laptop, you can also choose to not save that local Dropbox folder on your laptop.

How it Matches up to Google and Microsoft

The new pricing structure puts Dropbox back into the discussion of a personal cloud storage solution. Before these changes, there was no reason to really consider using Dropbox unless you were only saving a few GB of data. Google Drive has been offering what Dropbox is just now starting to offer, which is 1TB for $9.99 a month. However, Google does not offer the 1 year up-front payment option which saves users an extra $20.

Microsoft is by far the winner though, as they are offering a 1TB storage option with OneDrive for a measly $2.50 a month. Even if you pay for a year of Dropbox up-front, you still save $70 with OneDrive's monthly payments. Despite not being the cheapest option, the plan change at least makes Dropbox a viable option for those who need the space. Since Dropbox does have some of the most useful and convenient features of any cloud storage file management system, they can afford to charge a bit more than OneDrive.

The Future of Dropbox

For a while it seemed like Dropbox was slowly being phased out, even though it was once one of the most popular cloud service providers on the internet. When Google and Microsoft began offering generously priced plans with high amounts of data, Dropbox was still sticking to their outdated pricing structure. I'm not sure anyone was expecting such a huge change in pricing, but it will definitely be a well received change.

Compared to Google Drive, iCloud, and OneDrive, Dropbox still remains one of the most convenient and easy to use cloud service providers. They will definitely have their hands full when competing with these big name companies, but it is clear they don't want to go down without a fight. We will continue to keep you posted about new details in what have apparently been titled the 'Cloud Wars', so be sure to keep an eye out in our news section!