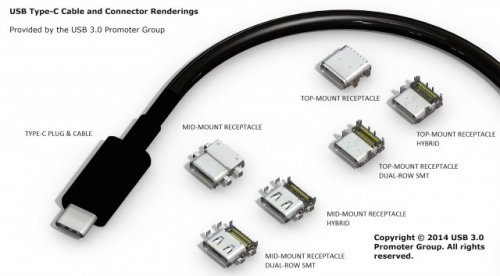 If you've been following the tech news during the past 6 months you may have already heard about the new reversible USB connector that is set to revolutionize how we use the Universal Serial Bus (USB) ports on all kinds of devices.

If you haven't heard about this new connector, its main advantage is that either end of it can be plugged into the USB port, as both connectors on each end are identical. The primary benefit of such a design is that you'll no longer have to determine which end of the cable is the proper end to plug in to your device.

According to the USB 3.0 Promoter Group, the design of the Type-C reversible USB connector has been finalized and is now ready for commercial production.

Not Ready for Commercial Distribution Yet

So does that mean that major manufacturers are going to release their version of the Type-C now? Not quite yet. Before that happens, the designers at the USB Implementers Forum (USB-IF) are going to have to spend some time building cables, adapters, and devices that will be compatible with the new connector. After all of those compatibility issues have been worked through then we could start to see Type-C connectors becoming the standard in the mainstream marketplace at some point within the next 2-5 years.

The initial production period should occur during the next few months, but given the fact that the Micro-USB connector is government-mandated as the standard mobile phone charger in many countries around the world, it could be a few years before we see it reach the peak of its popularity. Furthermore, at the moment an adapter is required to use the Type-C connector, as it is not backwards compatible with conventional USB cables.

Let's take a quick look at some of the main advantages, specifications, and features that we can expect to see in the upcoming Type-C connectors. 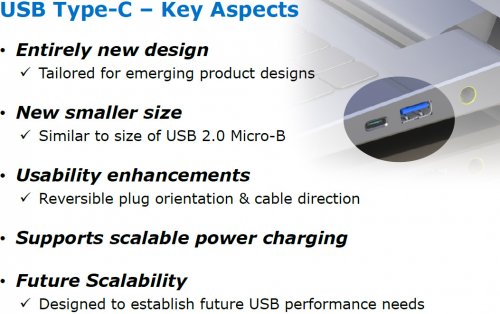 The new USB Type-C connectors have been designed to simplify and enhance the process of interfacing with emerging product designs in the smartphone, laptop, and tablet industries. Similar in size to the USB 2.0 Micro-B connector, it is large enough to easily connect to laptops, tablets, and desktops, yet small enough to conveniently interface with smartphones.

Given that the cable will have identical connectors on both sides, you'll no longer have to worry about finding the right end to plug in. The reversible plug orientation design makes it easy to connect devices in low lighting scenarios.

The new connectors are expected last a full 10,000 power cycles, and are equipped with enhanced RFI and EMI-mitigation features. The Type-C connector components have also been designed with future scalability in mind, with the expectation being that they'll be able to accommodate the needs of next generation USB devices.

The connectors have a receptacle opening that is 8.4mm x 2.6mm, with a power delivery capacity of 3A through standard cables or 5A through direct connections.

Unfortunately, you may have also learned about the inherent security flaw that all USB devices have – they can all be programmed to pose as another device (i.e. - keyboard or mouse), leaving open the possibility for hackers to use USB drives, smartphones, or any other USB-capable device as a way to take remote control of the host device.

Still, this is an exploit that has been known about for quite a while, and given that it hasn't affected the popularity of conventional USB ports, we don't think this security issue will hurt the sales of the upcoming Type-C Reversible USB connector. There is also a possibility that future development of the connector could lead to a type of USB interface that is more secure, so that will be an interesting aspect to follow.


Until the Type-C USB is produced, this joke still applies:

"When the inventor of the USB stick dies they'll gently lower the coffin, then pull it back up, turn it the other way, then lower it again."

- from https://twitter.com/cluedont/status/482614101764763648
< PREVIOUS ARTICLE
How to Update your CPU/GPU Drivers
NEXT ARTICLE >
Ice Bucket Challenge: 10 Tech CEOs that got iced to raise ALS awareness