How to Transform Your Smartphone Into A Universal Remote Control

Most people own several remotely controlled devices, such as TVs, DVD players, amplifiers, air conditioners, etc. However, each device has its own remote control, something that creates an unavoidable mess in the house. Thanks to the specifications of newer smart devices though, here is how you can transform your Android smartphone into a Universal Remote Controller for all your devices.

Converting your Android smartphone into a Universal Remote Controller

Over time, Android devices have become more powerful. Although the IR signal is not a new feature, nowadays most smartphones are equipped with an Infrared Blaster. Don’t worry if you don’t know what IR Blaster is; we’ll get into it right away.

What is an IR Blaster?

IR Blaster, or IR Transmitter, emits infrared light from tiny LEDs, which is invisible to the naked eye. Then it controls the various functions of the device which has the IR receiving sensor.

This IR signal contains packets of codes which correspond to different electronic devices. Thus, the receiving device, regardless of the manufacturer, can recognize the signal and operate according to the instructions received.

A smartphone which has an IR Blaster is able to mimic any infrared remote controller, controlling autonomously different devices. This way you can turn it into an ideal universal remote controller.

Does my Android/iOS device has an IR blaster?

The first thing you need to do is check whether there is a tiny infrared port at the top of your device, as you can see in the photo below. 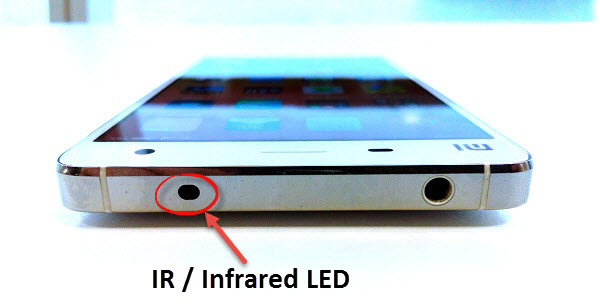 If you're not sure about the port, you can visit this Wikipedia page, which has a list of all devices that have a built-in IR blaster.

In order for your smartphone to replace a real remote control, you have to use special apps, which allow you to control different devices simultaneously.

SURE Universal Remote is perhaps the best and most unique free apps for transforming your smartphone into a universal remote control. This app can even become the remote control of unknown devices. 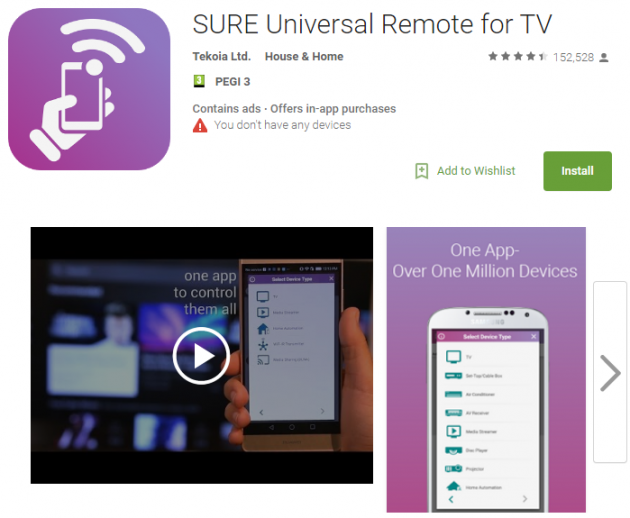 The first thing you need to do after opening the app is to successively add your remote controlled devices. All you have to do is tap on the "+" icon in the main screen, and then select the "Traditional Remote (IR)" option from the tab that opens. 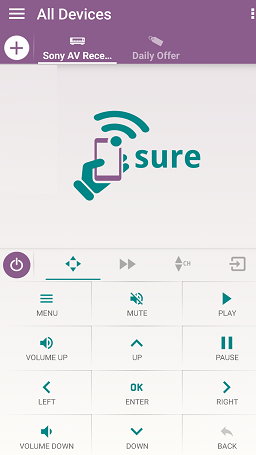 From the same tab, the app also gives you the ability to remotely control via Wi-Fi devices which do not have IR.

The next tab will display all types of devices which have IR, such as TV, projector, air conditioner, AV receiver, disc player, etc. Locate the type of device you wish to control, and tap on it to proceed to the next screen. 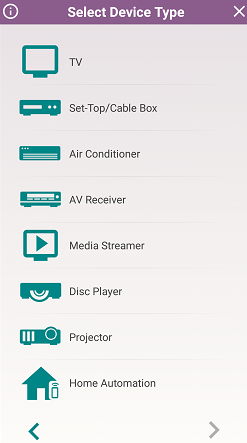 From there you can select your device’s manufacturer. The app allows you to type the manufacturer’s name in the corresponding field so as to avoid going through the whole list manually. 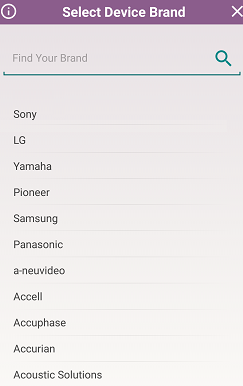 After locating the device’s manufacturer, all you have to do is tap on it, point the smartphone towards the device and then tap on “Power On” to turn on the device. 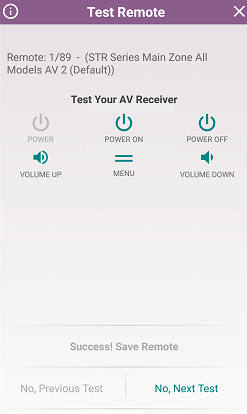 If the remote device does not turn, tap on "No, Next Test" and in the next screen try tapping on "Power On" again. Not more than two attempts are required for popular manufacturers.

After successfully turning on the remote-controlled device, tap on the "Success! Save Remote" option to store the device on the app’s memory.

At this point, the detection process for known device brands is completed, and you are now able to fully control your device remotely with all functions like a normal remote control.

Scanning for devices of unknown brands 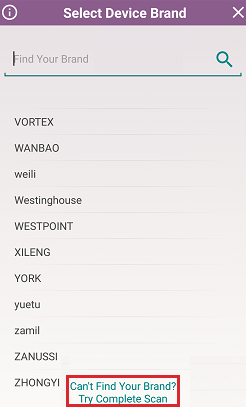 In the next screen, first make sure that the device is inactive, point the smartphone to it and then tap on the "Start scan" option. The automatic scan will begin, in order to identify the IR code of the unknown device. 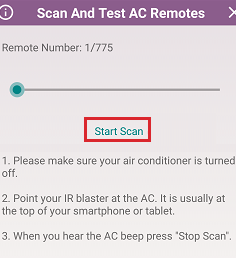 In this stage you will feel your smartphone vibrating, without having to perform any other action. Make sure that you keep it pointed to the device during the process.

Once the device has been detected you will hear a “beep” sound and the unknown device will be activated. Then you’ll have to tap on “Stop scan” to proceed.

The next step is to tap on the "Power Off" function, to check if your device will be deactivated. If it’s not responding, then it means that you must proceed to the next attempt by clicking on "No, Next Test", and tap on "Power Off" again. 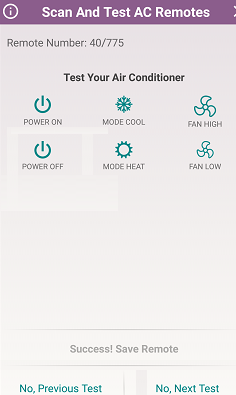 This procedure might require several attempts. You’ll have to keep tapping on "No, Next Test" and "Power off", until you make sure that the remote device is turned off.

On a successful attempt you’ll have to tap on “Success! Save Remote”.

Note that during these successive attempts, if you tap on "Power Off" you might hear a "beep" sound, but your device might in fact not be turned off. In this case, keep on tapping "No, Next Test" and "Power Off" again until you’re absolutely sure that the sound is accompanied with the deactivation of the remote device.

Once you find the right combination, tap on "Success! Save Remote".

From then on, your smartphone will have full control over the device of unknown brand.

If you wish, you can change the name of your devices by using the corresponding “Rename” function.

Sure Universal Remote also gives you the opportunity to register for a free account in its website, so that you can create a backup of your settings and added devices. This way you can immediately restore this data even after performing a factory reset or changing smartphone.

IR adapter for devices without a built-in IR Blaster

If your device lacks a built-in IR transmitter then you do not need to get a new device to gain access to this cool feature.

All you need is a tiny device that plugs into the headphones jack of your smartphone or tablet, which gives it all the IR capabilities that you saw previously.

These adapters are relatively cheap and you can find them on many stores (such as eBay), for less than $15-20.

The aforementioned adapters are especially useful for iOS devices, which do not have built-in IR Blaster.

Jakcom is a tiny portable IR remote control ideal for all iOS devices. It has no external battery, and all you have to do is connect it to the headphone jack of your device. 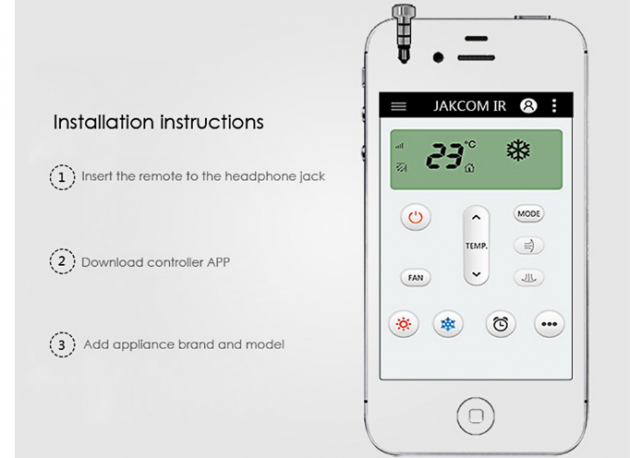 This tiny adapter is available in Gearbest for the price of $4.89. Additional features include a rotating mechanism for turning it on/off.

The device works with its respective app, which can be downloaded for free from the Apple store. However, Sure Universal Remote is available for iOS devices as well. 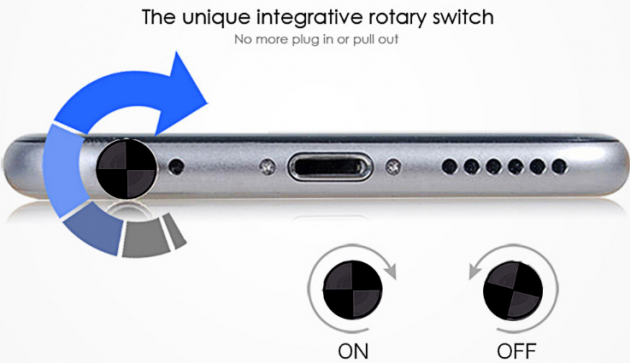 Keep in mind that iPhone 7 users cannot insert the device directly in the headphones jack since the iPhone 7 doesn’t have a 3.5mm headphones jack. This means that users will have to get a special Lightning-to-3.5mm adaptor in order to use Jakcom Protable Smart Controller.

Otherwise, the following smart device works perfectly with the iPhone 7.

Pronto is a small and elegant infrared device with the shape and size of salt dredger. It is particularly popular is ideal for each and every iOS device, as well as Apple Watch. 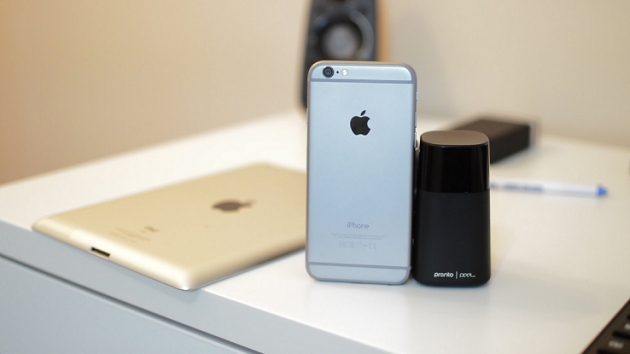 Pronto’s manufacturer claims that it can control more than 450.000 devices. The connection with iOS devices is performed wirelessly, via bluetooth.

The device works only with its own free app known as Peel Smart Remote, and apart from iOS, it is also compatible with several Android devices. 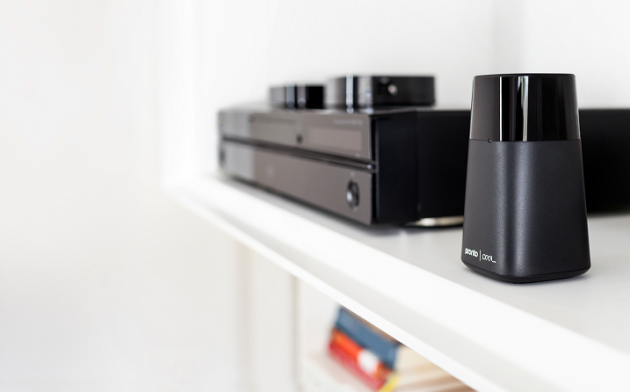 Here you go, now you don't have to worry about missing remote controls anymore. For any problems or suggestions, don't hesitate to post in the comments section below!


Thanks! I did not know about SURE. It works flawlessly with my mi4c phone and my TV.
< PREVIOUS ARTICLE
Game Review: Exerience the legend of the Mermaid Swamp
NEXT ARTICLE >
Game Review: Trapped inside an eerie gallery in Ib